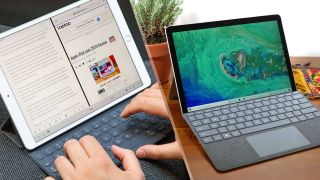 We already put the new Surface Go 2 up against the iPad in what ended up being a close battle between budget tablets. But the Surface Go 2 is as much a competitor to the iPad Air as it is the iPad because Microsoft lets you customize the Surface Go 2 with a faster CPU, more RAM and upgraded storage.

When configured with the top-end specs, the Surface Go's price jumps from  $399 up to $639 for the Wi-Fi model. Apple's iPad Air starts at $499 and goes up to $649, making it a prime rival to Microsoft's cheapest tablet.

If you're OS-agnostic, meaning you don't have a preference between Windows 10 or macOS, then you've got a tough decision to make. These are both fantastic tablets with rich displays, premium designs and fast performance. So which one should you buy? We put these two tablets head-to-head to help you decide.

The iPad Air starts at $100 more than the base Surface Go 2 but how much you spend depends on the configuration you choose.

When you're configuring the iPad Air, the only change you can make is upping the storage from 64GB to 256GB. We wish there was a middle option because that bumps the price up to $649, which is more expensive than the $629 Surface Go 2 with an Intel Core m3-8100Y CPU, 8GB of RAM and a 128GB SSD.

If the base model isn't powerful enough and the top-end config is too pricey, Microsoft also sells a $549 version of the Surface Go 2 with a Pentium 4425Y CPU, 8GB of RAM and a 128GB SSD.

There are LTE versions for both of these tablets; Apple charges an extra $130 on top of the Wi-Fi models whereas Microsoft charges a $100 premium for 4G connectivity.

Simple and sleek, both of these tablets look and feel like premium products. Where the iPad may have a more elegant design, the Surface Go 2 is more practical.

Microsoft's tablet has a kickstand that lets you prop the screen up or convert the tablet into a laptop with the optional keyboard attached. The kickstand, along with additional ports, gives the Surface Go 2 an edge over the iPad when you need the tablet for more than watching videos or browsing the web.

The Surface Go 2 is also an attractive tablet if you prefer a minimalist design; It has a magnesium chassis with a stylish, mirrored Microsoft logo on the rear kickstand. Slim bezels give the tablet a modern appearance, although the black frames surrounding the screen are still somewhat thick.

The iPad Air has a straightforward design, but one that has stood the test of time. There is not much to mention apart from the physical Touch ID button located on the bottom bezel beneath a 10.5-inch display. Face ID is still missing on the iPad Air whereas the Surface Go 2 has an IR sensor for Windows Hello login.

As for which of these tablets has a better design, that really comes down to personal preference. I'd go with the Surface Go 2 because facial recognition is typically faster than using touch and the kickstand is worth a small compromise to size and weight.

This round isn't as close. The iPad Air charges via a Lightning connector and there is a headphone/mic jack for wired audio. Unless you get the LTE model with a nano-SIM slot, that's it for ports.

In contrast, the Surface Go 2 has a USB-C input, along with a Surface Connect port, a headphone/mic jack, a microSD card slot and a Nano-SIM for LTE.

Microsoft and Apple only use the best displays for their products, and those on the budget-friendly Surface Go 2 and iPad Air are no different. But if I had to grab a tablet to watch my favorite shows on, I'd go with the iPad Air.

Both the Surface Go 2 and iPad Air have 10.5-inch displays. The Apple tablet has a slightly higher 2224 x 1668 resolution compared with the Surface Go 2's 1920 x 1280-pixel screen. They're both very sharp, and you'll have no problems reading text or seeing small details when you watch YouTube videos or stream movies.

But the iPad Air wins this round because it covers 132% of the sRGB color gamut compared with the 107% of the Surface Go 2. That means the iPad Air has a more vivid display.

The Air's panel also gets brighter, reaching an average maximum brightness of 425 nits. The Surface Go 2's screen is also quite luminous but it stopped just short, at 408 nits.

The Surface Go 2's Type Cover keyboard also costs less, at $139 compared with the iPad Air's Smart Keyboard Folio, which goes for $159. My only major complaint with the Type Cover keyboard is that the version for the Go 2 is cramped and the bottom isn't rigid, so it bounces around when you type on your laptop.

It makes up for those shortcomings with a plush Alcantara fabric that is available in Black, Poppy Red, Ice Blue and Platinum colors. Also, the Type Cover's keys are snappy and offer the right amount of bounce for my fingers to effortlessly jump from one key to the next.

Perhaps the biggest advantage of the Surface Go 2's keyboard is that it has a touchpad. Apple added cursor support to the latest version of iPadOS, but the only keyboard the Cupertino giant sells with a touchpad is the Magic Keyboard for the iPad Pro.

The Smart Folio for the iPad Air is nothing to write home about. It's easy to connect and looks sleek, but the keys are mushy and, it's worth repeating, there is no touchpad.

Both tablets support stylus input, and you'll spend $99 whether you get the Apple Pencil or the Surface Pen.

Even if you get the maxed-out Surface Go 2 with an Intel Core m3-8100Y CPU and 8GB of RAM, the iPad Air will outperform it. That's because the A12 Bionic chip within the iPad Air is a beast, capable of competing with mid-range laptops.

Our high-end Surface Go 2 review unit notched a 6,815 on the Geekbench 4 overall performance test. That falls well short of the 11,471 achieved by the iPad Air. On the more demanding Geekbench 5 test, the Surface Go 2 landed at 1,563 whereas the iPad Air gets around 2,900 based on user-input scores.

This is a very close round. If anyone is the winner, it's the consumer. That's because the Surface Go 2 lasted 11 hours and 39 minutes on our battery test (continuous web surfing over Wi-Fi at 150 nits) while the iPad Air endured for 11 hours and 54 minutes.

We won't factor this round into our points totals, but we'd be remiss not to mention the differences between iPadOS and Windows 10 Home (in S Mode).

iPadOS will be familiar to iPhone owners or anyone who owns an older iPad. Apple hasn't changed the clean UI, but iPadOS adds widgets to the homescreen, more capable multitasking and a new version of Safari. The most recent version even brings long-awaited cursor support, although you'll need to buy a third-party keyboard to enjoy the feature.

iPadOS still feels like a mobile-first operating system, especially given the myriad of apps available in the App Store. This arguably makes the iPad a better tablet for entertainment and consuming content.

If you're reading this, you're probably already familiar with Windows 10. Before I give a brief overview of the OS, it's worth mentioning that the Surface Go 2 runs Windows 10 Home in S Mode out of the box. S Mode limits downloads to those in the Microsoft Store, so you're locked out of installing third-party software. You can revert to the full Windows 10 Home, but doing so revokes your access to S Mode for good.

Windows 10 is a desktop operating system with few apps optimized for tablets. As such, most of your content consuming will be done through a browser. Of course, the ability to download third-party apps (once you exit S Mode), makes the Surface Go 2 a better tablet than the iPad for productivity.

The Surface Go 2 wins this face-off by a narrow margin thanks to its practical design, wider selection of ports and more comfortable keyboard. Each of these advantages makes the Surface Go 2 a better laptop alternative than the iPad Air.

That said, if you want a traditional tablet, the iPad Air is arguably the better choice. It offers much faster performance than the Surface Go 2 and its 10.5-inch display is brighter and more vivid than the one on the Surface. It's also a slighter sleeker tablet, although they're both very portable devices.

Taking everything into account, these two tablets excel at different use cases -- the Surface Go 2 for light productivity and the iPad Air for consuming content -- but they're both great options for consumers.