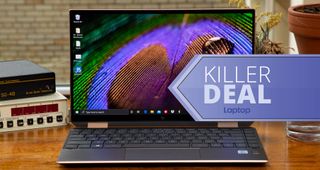 Spring clearance deals on laptops are in full swing right now. For a limited time, you can save big on an HP 2-in-1 laptop.

It's one of the best laptop deals you can get.

The versatile HP Spectre x360 13 gives you the best of both worlds with its ability to switch from a laptop into a tablet. It's easily one of the best laptops for the money.

In our HP Spectre x360 review, we were impressed by its elegant, compact design and vivid 4K OLED display. Although its webcam could be better, we rated it 4 out of 5 stars for its strong performance and lightning-fast SSD.

In the design department, The Spectre x360 sports a premium aluminum build with brass accents surrounding the lid. Its 4K, glossy display surrounded by slim size bezels is ridiculously colorful and sharp.

When it comes to ports, the Spectre x360 packs an HDMI port, two Thunderbolt 3 ports and one USB Type-A port. There's also a microSD card slot and a headphone jack integrated into its design.

At $300 off, the HP Spectre x360 is an incredible value if you want a premium machine.