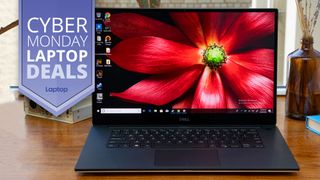 Cyber Monday is finally here. And there is no better time of the year to get a steep discount on laptops, tablets or peripherals. We're tracking killer Cyber Monday laptop deals from various online retailers, including Amazon, Best Buy and Walmart.

Since Cyber Monday is an online-only shopping event, you can avoid in-store stampedes and buy everything you need from the comfort of your couch.

While you shop, keep in mind that new Trump tariffs will kick in on Dec 15, which could boost the price of laptops and tablets. In fact, prices could experience an exorbitant 15% increase as a result, so you might want to take advantage of these low Cyber Monday prices while they're still around.

Microsoft Surface Pro 7: was $959 now $599 @ Best Buy
This Surface Pro 7 sports a 10th-gen Intel Core i3 CPU. It also comes bundled with Microsoft's Type Cover, so you can use it as a laptop or tablet. On sale for $599, it's at its lowest price ever.
View Deal

Surface Pro 7 (Core i5) w/ keyboard & pen: was $1,429 now $999
Best Buy is taking $430 off the Surface Pro 7 with a Core i5 CPU and 256GB of storage. Again, this epic deal includes the Surface Pen and Type Cover keyboard, accessories we strongly recommend. View Deal

Google Pixel Slate (Core i5): was $999 now $622
Google's first attempt at a tablet, the Pixel Slate has an elegant design, a sharp screen and a comfortable keyboard (sold separately). It also lasts 10 hours on a charge. View Deal

Lenovo 14w Laptop: was $299 now $129 @ Lenovo
Do you need the cheapest Windows 10 laptop that currently exists. Well, let me introduce you to the Lenovo 14w Laptop. This cheap as hell machine comes with AMD A6-9220C CPU, 4GB of RAM and 64GB eMMC of storage.View Deal

Asus ZenBook 13: was $999 now $899
You heard of the little black dress? Check out this little blue notebook. The Asus ZenBook 13 has an 8th Gen Intel Core i7 CPU, integrated graphics and a 512GB SSD. And you get a digital number pad hiding in the touchpad waiting to boost your productivity.View Deal

Samsung Chromebook 3 11.6": was $189 now $132
It doesn't get much cheaper than this. Amazon is taking $56 off what is already one of the least expensive laptops on the market. This Chromebook is a great option for kids. View Deal

Asus ROG Strix Scar II: was $2,099 now $1,499
The Asus ROG Strix Scar II has an 8th Gen Core i7 processor and a Nvidia RTX 2070 GPU, which is plenty powerful. Throw in a gorgeous 1080p 144Hz display and an aggressive, yet relatively lightweight design and you've got a winner on the gaming and budget front.
View Deal

Asus Chromebook Flip C434: was $599.99 now $549.99
Asus' premium 2-in-1 offers plenty of versatility thanks to a 360 degree hinge, snappy 3.4 GHz, Intel Core m3-8100y Processor and all-day battery life. While you won't be running demanding programs like Photoshop natively, the C434 makes up for it with it's responsive and effortless experience.View Deal

Razer Blade 15 (RTX 2070): was 2,599 now $2,260
If you want a premium laptop on top of a powerful gaming rig, then the Blade 15 is the laptop to buy. In our Razer Blade 15 review, we praised the laptop for its strong performance and long battery life.View Deal