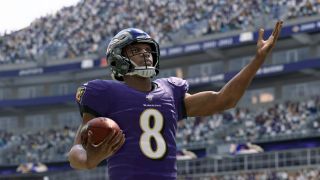 Game companies around the world, including EA, Xbox, Sony, Activision, Naughty Dog and more, are taking a stand with those who are protesting across the United States to find justice for George Floyd's murder.

EA Sports was supposed to unveil Madden NFL 21 today but has decided to postpone in light of recent events. Keep in mind, this is the same company that censored Colin Kaepernick's name in a Madden NFL 19 song.

In a statement on Twitter, EA Sports said, "We stand with our African American / Black community of friends, players, colleagues, and partners. Our immediate attention is on actions we can take to drive change against the unjust treatment and systemic bias that is plaguing the nation and our world."

The statement continues: "We'll find another time to talk football with you. Because this is bigger than a game, bigger than sports, and needs all of us to stand together and commit to change."

EA's next event is EA Play 2020, which is scheduled for June 11, so we imagine that we'll hear more about Madden NFL 21 then.

EA Sports isn't the only company taking a stand. Here are a few statements from other renowned game companies.

Naughty Dog, the studio behind Uncharted and the Last of Us, released a statement: "Now is not the time for any of us to be silent. For too long too many have suffered under a systemic problem in America. Too many have lost sons, daughters, brothers, sisters, fathers, and mothers. We stand in solidarity against racism and injustice."

The statement continues: "Now is the time for all to do our part and end anti-Black racism and violence. Many of us at Naughty Dog are donating to national and local organizations. Please consider donating yourself. We hope to see the beginning of lasting change for POC in America. Black Lives Matter."

Twitch chimed in: "Black people have been suffering under the oppressive weight of racism in America for far too long. We cannot delight in the creature contributions of the Black community on Twitch and remain silent while they are in pain."

Chorus developer Summerfall Studios also released a statement and donated money to the Minnesota Freedom Fund to support jailed protesters and to FreeHer, a fundraiser for the first Australian women to pay outstanding warrants "so they are not unfairly imprisoned."

Asus ROG Zephyrus G14
Laptops Direct
£1,069.97
View
We check over 130 million products every day for the best prices
View All Deals
Be In the Know