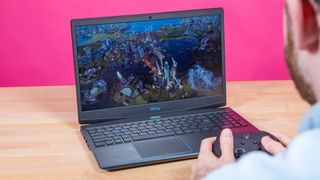 Black Friday deals are pouring in before we can even get to Thanksgiving, and now you can get the Dell G3 15 from Best Buy for $300 off. Even for the low price of $699, this version of the G3 15 offers an Nvidia GeForce GTX 1660 Ti GPU, which is the same GPU you'll find in the high-end $1,000 configuration.

The Dell G3 15 is one of our favorite cheap gaming laptops under $1,000 thanks to its strong overall performance and graphics, above-average battery life and awesome Alienware Command Center software.

In our Dell G3 15 (2019) review, the G3 15 showcased that it could handle graphically intensive games even at the highest settings, and nailed 30 frames per second on Rise of the Tomb Raider just with a GTX 1650 GPU (the GPU in the sale model is stronger).

The laptop also lasted 6 hours and 41 minutes on a single charge, which is excellent for a gaming laptop. On top of that, the laptop offers the Alienware Command Center app, which is one of the best gaming utilities around.

If you're looking a gaming laptop with stronger components, keep track of our best Black Friday deals and best Cyber Monday deals hubs to see more hot products on sale.