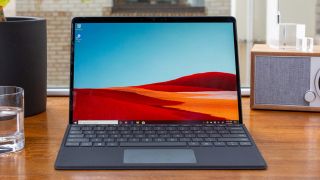 Microsoft Surface Pro X owners can expect improved speeds from their tablets. Microsoft is rolling out a Surface Pro X firmware update, packed with a host of performance enhancements.

The new system update may address some of the gripes we had with the slate in our Surface Pro X review. Although we were impressed with its overall design, vivid display, and long battery life, its app compatibility issues and middling performance left us underwhelmed.

That said, the latest Surface Pro X update brings a list of improvements and fixes to the Teams app experience as well as the GPU, Bluetooth connectivity, and overall system stability.

The  Surface Pro X firmware update is available now, but keep in mind that not all owners will receive it at the same time.