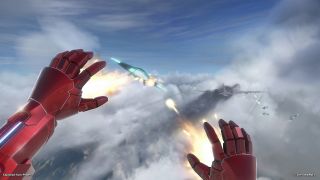 Suit up, kids. Marvel's Iron Man VR demo is out right now on PS4, so dust off that PSVR and go save the world.

If you download and play Marvel's Iron Man VR demo, you can unlock the Molten Lava Armor Deco in the full game.

If you've seen Ant-Man and the Wasp, you'll remember Ghost as the woman who can phase through objects and had multiple confrontations with the titular characters.

If you have a PlayStation VR, it's definitely worth trying out Marvel's Iron Man VR demo. And actually, I played this demo before at a PlayStation event, and it was a lot of fun.

The movement in Marvel's Iron Man VR takes some getting used to. But once you get the hang of it, it's easy to transition from flying and hovering to punching and blasting your way through enemies.

Marvel's Iron Man VR is launching on July 3, 2020 for the PS4 (PSVR), so stay tuned for more coverage before the official release.