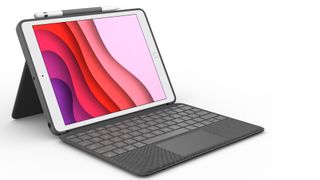 Logitech is coming to the rescue for all of you who were thrilled to hear Apple announce trackpad support for old iPads and a new Magic Keyboard with trackpad alongside the iPad Pro 2020. Or, those who were excited before being immediately crushed by that $299 Magic Keyboard starting price and limited compatibility.

Enter the Logitech Combo Touch (via PhoneArena), a backlit keyboard with shortcut keys and a trackpad. Oh, and it's just $149.

The Logitech Combo Touch is a folio-style case and keyboard that is compatible with the iPad 2019 (7th gen), iPad Air 2019 (3rd gen), and iPad Pro 10.5-inch. It uses the Smart Connector to pair with your iPad and power the keyboard. For Apple Pencil fans, it even has a built-in stylus holder on the side. The interior has a cloth texture to go easy on your iPad screen and wrists.

As you might have already noticed, the Logitech keyboard isn't compatible with the new iPad Pros or even the previous generation of iPad Pros. We hope this is just Apple being protective of its initial launch of the Magic Keyboard for iPad Pro and that we'll eventually see the Logitech Combo Touch for the new iPads.