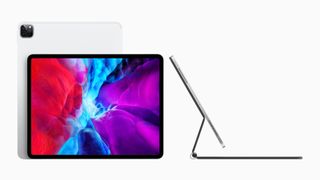 Apple just unveiled the new iPad Pros a couple of weeks ago now, but a patent granted to the company today points to a potentially big change coming to future tablets. The patent depicts a TrueDepth camera that is centered on the top of the iPad in landscape orientation rather than the now-familiar portrait orientation (via PatentlyApple).

Given the prevalence of apps that optimize for landscape mode on the iPad, and the frequency with which the company depicts the iPad in that orientation in marketing materials, it wouldn't be too shocking to see a move to landscape mode.

The images associated with the patent application show a notch allowing for the TrueDepth camera. It's worth noting that the patent states the camera could also be embedded in the bezel.

As always with patents, it is important to remember that the company is covering all of its bases to avoid restricting itself to an extremely specific implementation. This patent was originally filed all the way back in Q2 of 2017 before the iPhone X was even released.

Whether Apple will actually implement this new camera placement in the new iPads that are reportedly still coming later this year remains a mystery for now. But as the iPads come closer to being laptop replacements, the move to landscape orientation for its front-facing camera seems only logical.