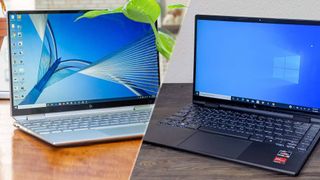 In the laptop industry, and the tech world in general, there is always a hierarchy of products. Every company has one, starting with cheap budget products and coalescing to exorbitant flagships. In most cases, the more money you spend, the better the product will be. I say most cases because every now and then a laptop like the HP Envy x360 13 comes around to stomp on the toes of its pricier relatives.

The Envy x360 costs only $800 yet it delivers everything you'd expect from a premium laptop. It has a great 13.3-inch display, a gorgeous design and long battery life, to name a few highlights. Its unmatched value makes us question the relevance of the Spectre x360 13, a similar notebook with a higher price tag.

In its defense, the Spectre x360, HP's flagship portable laptop, is one of the best devices I've reviewed recently; it impressed me enough to earn a 4.5-star rating and an Editor's Choice award (both of which are matched by the Envy) thanks to its striking design and impressive performance. But the Spectre costs hundreds of dollars more than the Envy x360, which means it needs to deliver more than its cheaper compadre.

Is the Spectre worth the extra cash or is the Envy x360 just that good of a deal? Read on to find out which laptop comes out on top of this sibling rivalry.

What makes this such a unique face-off is that we're comparing a mainstream laptop, the Envy x360, to its flagship counterpart in the Spectre x360. The reason? We dubbed the Envy x360 13 the best sub-$1,000 laptop on the market and consider it an excellent alternative to much pricier notebooks.

HP also sells a 4K OLED version of the Spectre x360. The display upgrade costs only $110 extra, so you can get a Spectre x360 with an OLED display, a Core i7 CPU, 16GB of RAM and a 512GB SSD for $1,329. That's surprisingly affordable considering the specs. The most expensive upgrade is opting for a 2TB SSD, which adds another $350 on top of the 512GB SSD price.

The Envy x360 13 doesn't feel like any other $800 laptop. That's in large part due to its all-aluminum design, which gives the Envy a sturdy, substantial feel that you won't find on other sub-$1,000 notebooks.

It's also stylish. Thin bezels surround the screen while attractive accents and aggressive angles give the Envy a decidedly modern appearance. The stealthy Nightfall Black color on our review unit is a shade more interesting than black and a touch prettier than brown.

The Envy x360 would take this section against most laptops, but not the Spectre x360. Few laptops are as elegant yet practical as the Spectre, whose chassis should be encased in bulletproof glass at the entry of a high-end jewelry store.

While these two laptops share a similar design language, it's apparent that more care was put into the Spectre. A close look at the pricier notebook reveals stunning details, from its faceted corners to the chamfered edges and chrome-lined touchpad. We reviewed the silver version of the Spectre, but if you prefer a pop of color, you can go with the Poseidon Blue with brass accents or the Nightfall Black with copper.

The Spectre x360 gets you those Thunderbolt ports without sacrificing anything else. On the left side of the Spectre are a USB 3.1 Type-A port and a headphone/mic jack while the right side is loaded with two Thunderbolt 3 ports (one angled on the faceted corner) and a microSD card slot. The Spectre has a webcam kill switch on the side whereas the Envy x360 uses a keyboard key to cover the camera.

The 13.3-inch, 1080p displays on the Envy x360 13 and Spectre x360 13 are nearly identical unless you upgrade to the OLED panel, which is only available on the pricier laptop. Both FHD panels are sharp, bright and plenty vivid. Given how similar they tested in our benchmarking, I wouldn't be surprised if HP used the same screen on both laptops.

Again, Spectre x360 and Envy x360 came very close to matching each other when we tested for brightness. The Spectre hit 369 nits of brightness while the Envy landed at 364 nits. For comparison, the average is 318 nits.

Yes, the Spectre x360 edged out the Envy in our brightness and color tests, but not by a discernible amount.

It also looks like HP used the same keyboard on these models. It's a smart move because it offers one of the best typing experiences you'll find on a thin-and-light laptop. The key spacing and size are generous even for people with larger hands and there is a satisfying heft you feel when you tap down on a key.

Both chiclet-style keyboards are backlit and the modern font HP uses ties into the updated looks of these notebooks. Despite my praise, key travel is limited so an external mechanical keyboard might be worth buying if you type long reports for a living.

The touchpads on the Envy x360 13 and Spectre x360 are assisted by Windows Precision drivers. They responded quickly to my taps and swipes, but the Spectre has an edge because its touchpad is covered in smooth glass whereas the Envy uses textured mylar plastic.

AMD swept Intel off the throne it spent years polishing. The Envy x360 13 is further proof that the mobile CPU landscape is changing in a big way. HP smartly elected to use Ryzen 4000 chips in the Envy x360 13, which deliver unprecedented performance at this price.

The Envy flexed its AMD muscles in our Handbrake test, converting a 4K video to 1080p resolution in 13 minutes and 44 seconds. It took the Spectre x360 a pedestrian 21 minutes and 13 seconds to complete the same task.

The HP did a good job of hiding its low price until we clocked the 256GB m.2 PCIe NVMe SSD, which duplicated 4.97GB of multimedia data in 16 seconds for a rate of 318.1 MBps. Unfortunately, the 512GB M.2 NVMe PCIe SSD in the Spectre x360 13 wasn't any faster, topping out at the same rate as the Envy.

Even Intel's Ice Lake CPUs, which flaunt upgraded Iris Plus graphics, have some catching up to do when it comes to graphics performance. We expect to see a comeback when Tiger lake CPUs arrive later this year with Xe graphics. Until then, the AMD Radeon Graphics chip in the Envy x360 13 is more capable than any integrated solution from Intel.

Our Dirt 3 benchmark proved as much when the Envy x360 played the racing game at a smooth 78 frames per second, whereas the Spectre x360 petered out at 47 fps.

Whether you get the Envy or the Spectre, you can leave your charger at home. When it comes to endurance, the Spectre x360 13 has an edge, lasting an incredible 13 hours and 20 minutes. The Envy is no slouch, either, pushing 11 hours and 52 minutes on our battery test, which involves continuous web surfing over Wi-Fi at 150 nits.

We usually recommend cheaper laptops over pricier ones not because they are better, but because they are a better value. But in this case, the Envy x360 13 isn't only cheaper than the Spectre x360, it's also a better performer. Not only that, but this cheaper model has a similar (if not the same) excellent screen and keyboard as the Spectre. Is it the better overall laptop, not considering the price? It's complicated.

The Spectre x360 13 is a fantastic laptop, even if it's not as good of a value. And actually, if you look at its price, it compares really well to other premium notebooks, like the ThinkPad X1 Carbon and the Dell XPS 13. Compared with the Envy, the Spectre gets you Thunderbolt 3 ports, a fancier design and a glass touchpad.

And while its performance lags compared to the Envy, the Spectre lasts a few extra hours on a charge. Add these advantages together and we wouldn't blame you at all for spending some extra cash on the Spectre, especially if you want the optional OLED display, which isn't available on the Envy.