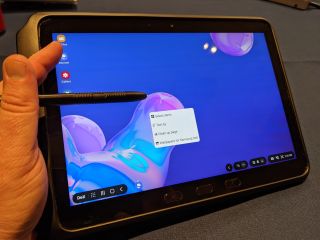 SAN JOSE, Calif. — For its next rugged tablet, Samsung is going big.

At its annual developer conference today (Oct. 30), Samsung took the wraps off the Galaxy Tab Active Pro, the follow-up to last year's Galaxy Tab Active 2 in the company's line of extremely durable tablets aimed at mobile workers who need a portable device that can stand up to the stresses of life in a warehouse, job site or field.

The Galaxy Tab Active Pro starts at $599 for a Wi-Fi-only model, and I got a chance to lay my hands on this heavy-duty device before its debut.

The Wi-Fi version of the Galaxy Tab Active Pro is shipping now for $599. Samsung will start selling the LTE-equipped version of the tablet on Nov. 15 for $679.

One of the big changes with the Galaxy Tab Active Pro is noticeable right away — it's got a 10.1-inch display, which is a step up from the 8-inch screen on the Tab Active 2. Just as smartphone users are demanding larger screen sizes, mobile workers want more display real estate on their tablets, so this was a much-requested feature, Samsung says.

Samsung describes the Galaxy Tab Active Pro's display as "enhanced touch," meaning you can still operate it without removing work gloves — a must for a device aimed at mobile workers. Like the Tab Active 2, this new tablet comes with a ruggedized S Pen. It slips neatly into a grove at the top of the Tab Active Pro.

There are also physical home, back and recent buttons on the tablet, and Samsung added a programmable button to the Tab Active Pro that can quickly launch two frequently used apps.

Don't expect the sleek edges and tapered design you see on other tablets. The Galaxy Tab Active series is built to take a licking, and the Pro version is no exception, encased in a thick frame that adds a significant amount of heft. (The tablet tips the scales at 1.4 pounds, and you notice it when you're carrying it around.)

That bulk helps the Galaxy Tab Active Pro endure the rigors of working life. It's got a MIL-STD-810G certification as well as an IP68 water resistance rating, so it can survive a dunk in 5 feet of water for up to 30 minutes. (The S Pen can, too.)

Battery life's an important feature for rugged tablets, more so than screen size, because the target audience for the device spends the nearly all of its working day nowhere near an electric outlet. With the Galaxy Tab Active Pro, Samsung can make the pitch that this tablet can last throughout that day and then some.

While the base model features Wi-Fi connectivity, Samsung will also offer an LTE-equipped version of the Galaxy Tab Active Pro. And unlike the Tab Active 2, which only worked on GSM-based cellular networks, this new tablet will be compatible with the networks of all four major U.S. carriers.

The Galaxy Tab Active Pro supports Samsung's DeX feature, meaning that when you're back from a job site, you can use a USB-C cable to hook up your tablet to your PC and use it as another display or as your primary computing device. It's the same feature Samsung introduced with the Galaxy Note 10 smartphone and that it's adding to the Galaxy S10 models via a software update.

On the back of the Galaxy Tab Active Pro, there's a 13-megapixel camera. It's joined by an 8-MP camera on the front of the tablet.

Pogo pins on the bottom of the tablet allow you to charge the tablet or connect third-party accessories. The tablet also comes with Samsung's Knox security platform as well as support for tools that IT admins configure and deploy the Tab Active Pro. To further boost the appeal to workplaces, Samsung teamed up with Citrix to include Citrix Workplace for organizing workspace apps and data on the tablet.