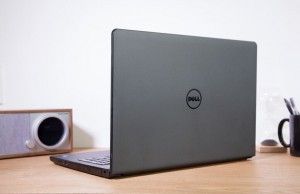 Editor's Note: We generally don't recommend laptops older than 2 years. For our top picks, check out the Best Laptops, or answer a few simple questions in our Laptop Finder to get personalized recommendations

Dell's mainstream Inspiron lineup tries to strike a good balance between performance and price, but the Inspiron 15 3000 falters in that goal. To get this machine's price down to only $329 (it starts at $299), Dell understandably had to make compromises, but too many of them are deal breakers.The 15-inch laptop suffers from mediocre performance, a dim display and an uncomfortable keyboard, but it does have fairly strong battery life and decent build quality. Competitors in this price range offer more.

The Inspiron 15 3000's design has an interesting texture but a boring color scheme. Dell constructed the back lid, keyboard deck and base using a textured black plastic, which feels smooth to the touch but is very flexible. The edges of both the lid and the base have a glossy black casing, which breaks up the design but creates some rough edges where the two materials meet. The Inspiron 15 3000 measures 14.96 x 10.25 x 0.99 inches and weighs a reasonable 4.88 pounds. It's both lighter and thinner than other 15-inch laptops, including the HP Notebook 15 (15.1 x 10 x 1 inches, 6 pounds) and the Acer Aspire E 15 (10.2 x 1.5 x 1.2 inches, 5.06 pounds).

On the left side of the laptop, there's a charging port (the charging indicator light is on the front edge), an exhaust vent, an HDMI connector, a USB 3.0 port and an SD card slot. On the right, you'll find a Kensington lock, a CD/DVD combo drive, two USB 2.0 ports and the headphone jack. On the inside of the frame, there's a webcam centered on the top bezel, as well as a power button on the upper-right portion of the deck. Notably, the bottom houses the laptop's only speaker, as well as an array of vents and a removable battery with a sliding-lock mechanism.

The deck and the screen on the Inspiron 15 3000 have moderately large bezels, which appear even larger because of the laptop's monochromatic appearance. The device's dual hinges felt sturdy when I opened and closed the lid, and I didn't hear any creaking when adjusting the display.

The 15.6-inch display on the Inspiron 15 3000 has a resolution of only 1366 x 768, so I wasn't surprised by the lack of screen space or the graininess. The panel is fine for writing documents and browsing the web, but tasks that require high levels of clarity, such as photo editing, are best left to other devices.

I watched the teaser trailer for Pacific Rim: Uprising and found that colors were accurate, though not particularly vivid. The resolution was the larger issue, as details on the Jaeger program mechs lacked sharpness. It also diminished the dramatic lighting effects, producing flat shadows and highlights.

The Inspiron 15 3000 reproduced 71.4 percent of the color gamut. That barely beats the Notebook 15's 70 percent and the VivoBook's 69 percent, but it falls far short of the Ideapad's 84 percent. All of these scores are well below the Aspire E 15's fantastic 159 percent coverage.

The keyboard on this Dell looks better than it feels. The keys on the Inspiron 15 3000 feature an attractive sans-serif font with white lettering that stands out nicely against the gray and black keyboard deck. The keys are slightly recessed from the deck, and Dell claims that the keyboard is splash-resistant.

With only 1.02 millimeters of key travel (1.5 to 2 mm is typical) and 64 grams of actuation weight required to press the keys, the Dell's keyboard made for an uncomfortable typing experience, and I noticed some flex as I typed. Even so, on the 10FastFingers.com typing test, I scored 62 words per minute with six errors, which is close to my 65-wpm and five-error average. The keys aren't backlit, but there is a full number pad on the right side, which will definitely appeal to some users.

I'm not a fan of the touchpad on this notebook; it's loud and produces a hollow clicking sound when pressed, which doesn't inspire confidence. At least the pad generally worked well with Windows 10's multifinger gestures.

The Inspiron 15 3000's bottom-firing speakers aren't very loud or detailed, and I had to turn the volume most of the way up before it was actually audible. I listened to Sorority Noise's "No Halo," and found the bridge and chorus sections bereft of the typically nuanced rhythms. It made little difference when I switched among equalizers and the various presets.

However, I was pleasantly surprised to hear some distinction when I plugged in my headphones. The volume levels were more suitable, and the various EQs sounded noticeably distinct and worked well with their respective genres. Despite these improvements, I still noticed a lack of overall clarity and an underwhelming sound presence. The 3.5mm headphone jack is also somewhat annoying to deal with, as I had issues removing my headphone jack from the cheap-feeling plug.

Dell's included MaxxAudio software lets you fully control the sound of the speakers, headphones and microphone. There are separate preset modes for games, movies, music and vocals, as well as a wide range of equalizers suitable for your favorite genre of music and some designed specifically for YouTube content. However, the multilayered interface could be more streamlined.

Equipped with an Intel Pentium N3710 processor, 4GB of RAM and a 500GB hard drive, our review configuration of the Dell Inspiron 15 3000 wasn't particularly speedy. We noticed plodding startup times and random stutters while web browsing and scrolling through documents. If you stick to only a few applications at a time, you'll be fine, but pushing it any further will cause some performance hiccups.

The Inspiron 15 3000 has an integrated Intel HD Graphics 405 chip that comes with the Pentium N3710, so it can't run any graphics-intensive games or tasks. At its native 1366 x 768 resolution, it struggled to run DiRT 3, managing only 21.1 frames per second. We consider anything under 30 fps unplayable.

The Inspiron 15 3000 offers pretty good battery life for this price range, but other systems last even longer. The system's 40-watt-hour battery ran for 7 hours and 15 minutes on the Laptop Mag Battery Test, which involves continuous web surfing over Wi-Fi. That's significantly better than the Notebook 15's 3 hours and 36 minutes and the Ideapad 100S' 5 hours and 51 minutes. However, its runtime is short of both the Aspire E 15's 8:16 and the VivoBook's 9:02.

After streaming a video for 15 minutes, the Dell stayed comfortably cool, hitting 94 degrees Fahrenheit in the top-right section of the base, 91.5 degrees on the trackpad and 84 degrees on the keyboard. All of these heat measurements are below our comfort threshold of 95 degrees. This PC's underside ran warmer than the 85 degrees from the Aspire E 15 and the HP Notebook 15, but it was cooler than the VivoBook's and Ideapad's 104 degrees in the same location.

The 720p webcam on the Inspiron 15 3000 is horribly grainy and casts everything in an eerie blue hue. It doesn't treat backlighting particularly well, and the edges of objects were especially pixelated and ragged in photos. Additionally, the camera app felt quite slow, taking a few seconds longer than we'd like to launch.

Dell includes a host of preloaded software -- such as the CyberLink Media Suite and a 12-month McAfee Antivirus subscription -- but other software utilities are more useful. For example, Dell's Support Assist organizes a lot of service information in one location and serves as a hub for downloading drivers and firmware updates. During my time with the laptop, it prompted me multiple times to install updates, though it never restarted without my permission.

As with most Windows 10 installations, the Inspiron 15 3000 can't escape from the annoying Windows Store ads for games and apps in the Start menu. Luckily, there is a quick right-click-and-uninstall option.

While we expect a company to make compromises on a PC that costs just $329, Dell's Inspiron 15 3000 doesn't do anything particularly well. Its design, while solid, isn't very appealing. The screen shows colors moderately well, but it isn't particularly sharp or bright. Its overall performance is also merely pedestrian when compared with similarly priced models.

At $349, the Acer Aspire E 15 is a much better option because of its vivid full-HD display, exceptional battery life and better overall performance. Even the Asus VivoBook E403SA -- with its longer-lasting battery, USB Type-C charging and premium metallic build -- would be a better option at the slightly higher price of $399.

In short, there's really no reason to buy the Inspiron 15 3000, since it fails to offer any advantages over its close competitors. Its $329 price warrants some missteps, but other laptops in the same price range simply make fewer compromises.

Less
Be In the Know