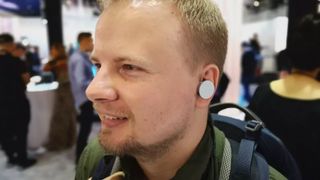 I got to listen to the Surface Earbuds at Microsoft's big Surface event in October, and walked away impressed by their comfort and sound quality. It's now April and we haven't heard a word about them ever since.

Originally slated for a Holiday 2019 release, the Surface Earbuds have fallen victim to numerous delays. But there finally appears to be a light at the end of the tunnel, as German retailers are getting ready to release the Surface Buds on May 6 (via WinFuture).

Microsoft originally intended to sell the Surface Earbuds at $249, but listings spotted by WinFuture shows them at €199, or around $215. Microsoft would be smart to keep the price as low as possible given the influx of wireless earbuds in the previous months.

The goal of any company competing in this budding (pun intended) space is to take a sliver of Apple's successes. If Microsoft keeps to its original $250 price, it would compete directly with the AirPods Pro, a stellar pair of earbuds with active noise cancellation.

Sound quality is an area where the Surface Earbuds could stand out. During my brief listen, Hozier's "Almost (Sweet Music)" had a surprisingly hefty bass thump and the lead singer's vocals were clear. With a design that will make you look like you're wearing gauges, the earbuds are supremely comfortable.

Another added value to the Surface Earbuds is its gestures and how they integrated with other apps. I had no problems launching Spotify and playing music with a few taps, and my colleague asked Cortana about the weather and even had his words transcribed into a PowerPoint presentation.

And at 8 hours, the Surface Earbuds last longer on a charge than the AirPods (5 hours) and AirPods Pro (4.5 hours).

It looks like we won't need to wait much longer to see if these unique features make up for the Surface Earbuds' lack of active noise cancellation and potentially high price.