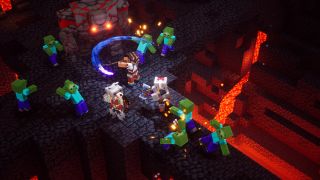 Animal Crossing: New Horizons has enjoyed a three-month-long streak as the best selling game in the Nintendo eShop, but it's finally been dethroned by none other than Minecraft Dungeons.

This isn't a big surprise considering Animal Crossing: New Horizons sales eventually had to die down, and since Minecraft Dungeons is based on... well, Minecraft. I'm sure fans are itching to play a new Minecraft game.

Since Minecraft Dungeons only costs $20, it's no surprise that it managed to get to the top so quickly, especially since kids love Minecraft.

Minecraft Dungeons puts you, and three other players (if you're playing co-op), up against the Arch-Illager, a once homeless Illager named Archie who was corrupted by the Orb of Dominance.

The gameplay mostly consists of hack and slashing around a procedurally generated dungeon. Unlike Minecraft, there's no open world, mining or building.

Of course, Minecraft Dungeons hasn't been as well-received as Animal Crossing: New Horizons, but it is performing well regardless.