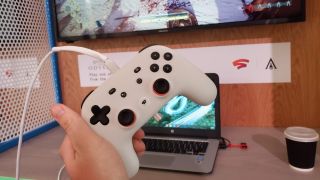 Google is trying to make Google Stadia as appealing as possible, and while it's going to take time, the company is working hard on it. Google rolled out Google Stadia to Samsung, Asus and Razer phones just last month, and now it's finally delivering its 4K games to the web, according to 9to5Google.

You could already play games in 4K on Google Stadia, but it was limited to certain devices like the Chromecast Ultra and TVs. Now it's available on the web for laptops and desktops. You can check your 4K status by going to your in-game menu, clicking "Connection," then "Data usage" where a green "4K" icon will appear, according to 9to5Google.

Of course, you also need a Stadia Pro subscription to play games in 4K as well, which costs $9.99 per month. But keep in mind, games like Red Dead Redemption 2 and Destiny 2 still can't be played in 4K. And Google Stadia's 4K games appear to be running at a lower resolution than games playing in native 4K, according to Engadget.

While it's cool that Google recently added the Serious Sam Collection to its list, the company still needs to deliver wireless Stadia Controller support on the web and expand the Google Assistant.

Playing Google Stadia's 4K games on the web isn't official just yet, but this rollout means we should get an official announcement very soon.