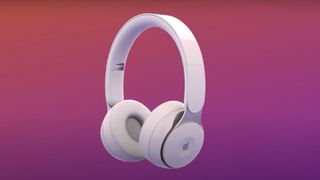 The Apple AirPods Studio, the tech giant's first over-ear headphones, is drumming up excitement among audiophiles and AirPods fans around the world.

Apple took the wireless earphones market by storm with its AirPods in 2016 and moved upmarket with the noise-canceling AirPods Pro last year, but the company has left the over-ear market to its Beats brand.

All indications suggest this will come to an end this year with Apple planning to release its own premium branded over-ear headphones in 2020. We've been calling it AirPods X, but its official name is reportedly AirPods Studio.

We've gathered all of the rumors regarding Apple's AirPods Studio over-ear headphones and pieced them together -- like a mosaic of tech-information goodness -- to give you a clearer picture of what to expect from Apple's headphones division in 2020.

You may be wondering, "How much does the Apple AirPods Studio cost?" We don't have an official price tag from Apple, but rumor has it that it won't come cheap.

The first leaks, spearheaded by YouTuber and reliable bean spiller Jon Prosser, revealed that Apple’s rumored over-ear headphones could cost $399, according to a listing found in Target’s product inventory.

Multiple Target employees have started reaching out to me about this 🤔 Showing up in their systems and on UPC scanners is this mysterious “Apple AirPods (X Generation)” listing, priced at $399. 👀Potentially Apple’s over-ear “StudioPods” headphones. Launch soon (March)? pic.twitter.com/NVcqH8As47February 22, 2020

This $399 value is $150 more than Apple's most expensive AirPods, the AirPods Pro. The new AirPods Studio will certainly be a premium headphone option in the Apple ‌AirPods‌ line.

In a follow up to this tweet, Prosser added that Target's system also contained three stock-keeping units (SKUs) for the Apple AirPods Studio headphones, which suggests that the high-end cans may be released in three different colors or editions.

Three months later, Prosser posted another tweet suggesting that the price of the AirPods Studio could be $349.

Looks like Apple is sticking with the “AirPods” branding for their new over-ear headphones. AirPods StudioCodename: B515$349May 9, 2020

While either price would fall in line with premium consumer options for noise-canceling over-ear headphones, Apple typically gravitates toward top-end pricing, and $399 represents the high water mark for the category as seen with the Bose 700.

The release date for the Apples AirPods Studio is rumored to be June 22.

YouTuber EverythingApplePro snagged an exclusive update from XDA Developer's Max Weinbach about the AirPods Studio. Paraphrasing Weinbach's words, EverythingApplePro said: "He's saying that the firmware has been finalized. They're ready to be flashed onto the production units, so that launch is happening imminently, likely at WWDC."

WWDC, also known as the Apple Worldwide Developers Conference, is scheduled to kick off at the end of June. During this virtual event, Apple will also reportedly reveal the iPhone 12.

This confirms April predictions offered by Apple analyst Ming-Chi Kuo and Prosser. Kuo speculated that mass production for the Apple AirPods Studio would start in mid-2020. As for Prosser, he also predicted a WWDC launch date for the AirPods Studio.

But wait, there's more; a May report from The Information revealed that factories in Vietnam are poised to ship the highly anticipated over-ear headphones to Apple by June or July. With all four sources pointing to a June timeline, an AirPods Studio headphones reveal at WWDC is highly likely.

Another big question you may be wondering is, "What does the Apple AirPods Studio look like?"

To date, 9to5Mac managed to obtain the clearest depiction of the Apple AirPods Studio headphones after discovering two icons in the code of an iOS 14 update. There are no wires shown in the picture, which suggests that the AirPods Studio will be wireless.

The icons show two different color options. This could mean that the AirPods Studio could come in black and white. If this is true, this is a welcomed change from Apple's all-white AirPods line.

Among those who have actually seen the prototype designs for the Apple AirPods Studio, the headphones were described as "retro" with swiveling oval earcups and thin metal arms connecting to the top of the earcups.

There are two separate designs for the over-ear headphones along with a potential third connected earbud product. Rumors have indicated that one of the over-ear options is a more traditional design similar to what is seen on the Bose 700 or Sony 1000-MX3 and the second uses a lightweight design to accommodate fitness activities.

Let’s take a look at the heavier traditional model first.

It wouldn’t be an Apple product without some clever bit of design and reportedly both the earcups and the material on the headband are magnetic, which will allow you to swap them out for different styles. This isn’t a unique feature, but it does help to secure Apple’s place in the higher-end of the market as this is something typically found from expensive brands like Master & Dynamic or Bowers & Wilkins.

Less is known about the fitness-focused design other than it being more lightweight than the other and that it features perforated earcups to allow for better breathability.

Given the target market and pricing, these are expected to feature active noise-canceling technology along with the Transparency mode found in the AirPods Pro. The latter would be particularly valuable for headphones intended for fitness.

Turning finally to the semi-wired earbud design, according to Prosser, this would look very much like the existing Beats X headphones with a cable connecting the two earbuds. Given the price and intended market, we don't expect these to include noise-canceling technology, but they could include the Transparency setting for increased awareness of the environment while exercising.

In addition to noise-cancelling and Transparency mode, we expect the AirPods Studio headphones to borrow other standout features from the AirPods Pro, such as a seamless pairing process (thanks to Apple's latest H1 headphone chip) as well as Siri support.

The Apple AirPods Studio may also sport sensors to detect whether your ear is positioned on the left or right of your head. As a result, these technologically advanced headphones will auto-route the audio channels.

The AirPods Studio, according to 9to5Mac, will also be equipped with a custom equalizer, which will be available via pairing on Mac systems and iOS devices. Users will have options for low, medium and high frequency adjustments.

What we want from the Apple Airpods Studio

Advanced noise-canceling: Our reviewer was reasonably impressed with the active noise-canceling found in the AirPods Pro, but they were no match for a pair of over-ear headphones. Apple needs to take a dramatic step forward in this department with its over-ear offering.

Long battery life: While Apple has managed adequate battery life with the AirPods and AirPods Pro, neither is anywhere near best in class when it comes to earbud battery life. Wireless over-ear headphones from Bose and Sony offer 20 hours or more of playback on a single charge. Apple will need to match or beat this mark.

Improved audio quality: While Apple has done a solid job with the audio quality in the AirPods Pro, it doesn’t hold up to best in class options like the Sennheiser Momentum. The form factor has been a major selling point for the AirPods and AirPods Pro but without this advantage for over-ear headphones, we are going to be less forgiving about audio quality.

Portability: Obviously, if you are looking for something supremely portable, you should be turning to the AirPods Pro or another true wireless earbud. That said, over-ear headphone manufacturers have increasingly managed to cleverly leverage hinged designs to allow them to fold down to a more reasonable size for travel. Having a nice included case that the headphones can fold into and fit in a carry-on or backpack is a must.