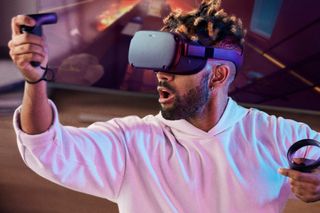 The Oculus Quest is the gaming industry's best VR headset, and now it's getting a revamped successor that may arrive later this year.

As Bloomberg reports, Facebook's Oculus division is in the advanced testing stage of its second-generation Quest headset. According to an insider close to the project, the new Quest prototypes are 10% to 15% smaller and, therefore, lighter than the existing Quest. This means you should be able to enjoy longer VR gaming sessions without discomfort.

They also have a faster image refresh rate for more realistic-looking VR games.

The Quest headset successor may also have upgraded controllers that fixes some complaints with the current one. Although no design has been finalized, the new Quest headset was originally slated for an end of 2020 release after the annual Oculus Connect event in September.

Facebook announced that Oculus Connect 7 will be an online-only event this year due to the ongoing COVID-19 pandemic. "In light of the evolving public health risks related to COVID-19, we’ve decided to shift Oculus Connect 7 to a digital format later this year," the company wrote in a blog post.

Current manufacturing and shipping delays have slowed restocks of the current Quest headset. It's possible new Quest's release date could be pushed back to 2021.

We expect more information about upcoming Oculus products to be available within the coming months.