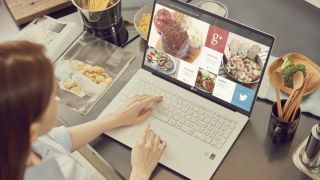 LG's featherweight Gram laptops are about to get a serious performance boost.

The company revealed today that the Gram 14, Gram 2-in-1, Gram 15 and flagship Gram 17 will be updated at CES 2020 in January with 10th Gen Intel processors. The announcement comes a month before the consumer electronics shows is set to kick off.

Like the previous versions, these upcoming Gram laptops will be extremely lightweight and compact. The 14-inch Gram 14 will weigh just 2.2 pounds and even the 17-inch Gram 17 will come in at under 3 pounds.

Those figures match the weight of the previous models, so you can expect the same class-leading portability LG's laptops are known for.

The new Gram models appear to be a refresh of the previous iterations, with the biggest change being an upgrade to Intel 10th Gen processors. LG opted for Ice Lake chips, so you can expect a big bump in graphics performance (LG claims a 2x increase) over the 8th-gen powered models, along with some minor everyday speed gains.

With the new 10th Gen chips, the 2020 Gram laptops will gain Wi-Fi 6 support and the ability to pack 24GB of DDR4 memory (up from 16GB), which is great for content creators who run multiple programs at once.

To accommodate those beefier components, LG outfit the Gram 15 and Gram 17 with a larger 80Wh battery --- a bump up from the previous 72Wh cell. The laptops also use LG's new Mega Cooling System; we'll forgive the silly name if it keeps these slim laptops from overheating.

Of these upcoming laptops, we're most excited by the Gram 17 and Gram 2-in-1. The Gram 17 remains the best 17-inch laptop for its impossibly portable chassis, gorgeous display and fast performance. If the Ice Lake chips fix the previous model's poor graphics performance and the 2020 model sports a faster hard drive, then we could have a serious winner on our hands.

The Gram 2-in-1, a 14-inch convertible model, is equally intriguing because it is estimated to have 20 hours of battery life. Of course, we'll need to test that claim with our own real-world tests, but even half of that endurance would yield a good result.

All of the new Gram models --- the Gram 14, Gram 2-in-1, Gram 15 and Gram 17 --- come with a Thunderbolt 3 input, a USB 3.1 Type-A port and an HDMI port. They also have a fingerprint reader, are tested to military-grade durability and come in either white or dark silver.

LG's ultralightweight laptops have come a long way in the past few years, and are now among the best in their respective classes. We'll be sure to check out the new models on the show floor of CES from Jan 7 to 10, so stay tuned for more coverage.