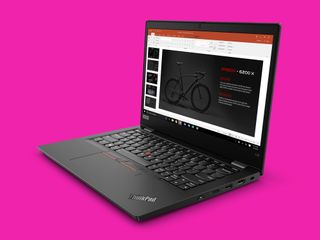 Business laptops –– they’re durable, secure and mighty expensive. Or are they? Realizing that not every mobile professional has the means to afford a top-tier business laptop, Lenovo is introducing its L-series of ThinkPad devices.

I know what you’re thinking –– value equals compromise. That’s not necessarily the case with the L-Series. The L14 can be outfitted with an optional aluminum lid. The bases of the systems are constructed from ABS plastic while the L13 Yoga is sporting an aluminum-magnesium alloy lid with a plastic base. The L13 and L15 are completely made of ABS plastic. Due to these lightweight materials, the 0.7-inch L13 is the lightest of the bunch at 3.1 pounds, while the 0.8-inch L15 is the heaviest at 4.4 pounds.

Regarding security, each of the laptops comes equipped with several security features including a dTPM 2.0 chip, a fingerprint scanner, an infrared camera and the ThinkShutter, a physical camera shutter to guard against prying eyes.

With the exception of the L13 Yoga, L-Series laptops have up to 3 display options. The L14, for example can range between an HD, 220-nit panel up to a FHD, 300 nit-display. As for the Yoga, it has a 13.3-inch, IPS, 300-nit touch panel. The convertible also has an integrated rechargeable pen which sets it apart from its brethren.

And while the L-Series looks good on paper, we’ll reserve our final judgement until we get the laptops into our lab for testing.