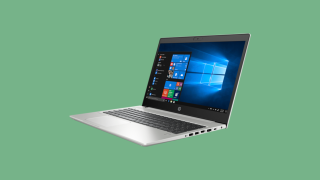 The laptops will be shipping in late April and are part of HP's business laptop lineup, which means the inclusion of security software, including HP DriveLock, Sure Click, BIOSphere Gen 5, Client Security Gen 5 and Sure Sense. But the highlight for many is going to be those new AMD Ryzen 4000 processors.

The junior member of the updated laptops is the HP ProBook 445 G7, which features a 14.1-inch anti-glare display with up to 400 nits of brightness. The exterior is a reserved aluminum design, which you'd expect from a business laptop.

Inside we have the aforementioned AMD Ryzen 4000 options for the CPU with the Ryzen 3 4300 APU, Ryzen 5 4500U, or the Ryzen 7 4700U depending on your needs and, of course, integrated Radeon Vega GPUs.

Base options include 8GB of DDR4-3200SDRAM with a max of only 16GB, but that isn't terribly surprising given the intended use case. Storage options include either a 500GB or 1TB SATA HDD or up to a 512GB PCIe NVMe M.1 SSD. Wireless options are solid with Wi-Fi 6 and Bluetooth 5 support.

The battery isn't massive at 45Wh, but given what the AMD Ryzen 4000 series was able to do for the battery life in the Asus ROG Zephyrus G14, that could still result in all-day battery life.

The senior executive model, the HP ProBook 455 G7 doesn't really change things up dramatically, for most specs you can simply refer to the description of the HP ProBook 445 G7 above.

In fact the only feature changes are a bump up to a 15.6-inch anti-glare display and the expected increase in size and weight that comes with that. In this case it jumps up to 14.37 x 10.11 x 0.75-inches and 4.41 pounds. The rest of the specs, including the battery size, remain the same. So it's just a question of whether that extra screen real estate is worth about a pound of additional weight.