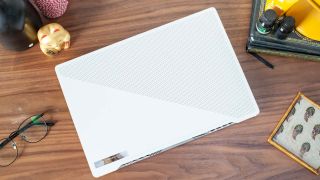 The Asus ROG Zephyrus G14 was recently branded as the longest-lasting gaming laptop to date -- the first of its kind to ever hit the double digits for battery life. The ROG Zephyrus G14 changed our perspective of what a gaming laptop can do, and is now setting an example for all other gaming laptops that succeed it. Its incredible endurance is primarily due to the AMD Ryzen 9-4900HS processor inside of it. It even landed on our laptops with best battery life page.

Needless to say, the G14 is making us more than optimistic about the future of gaming laptops when it comes to battery life. But we wanted to put it to the test. On top of our typical battery life benchmarks, we decided to test how the Zephyrus G14 handles gaming on the go, and how long it takes for it to die; the results are surprising.

By the end, the Zephyrus G14 had become the longest lasting gaming laptop we’ve ever tested, lasting an incredible 11 hours and 32 minutes. That number is leaps and bounds above the 4:26 mainstream gaming laptop average.

But how does the Zephyrus G14 hold up while gaming?

We then threw one of the most rigorous tests at the Zephyrus G14 to see how long it would last -- and it was surprisingly short.

One, we tested it at the max brightness as opposed to our typical 150 nits of brightness. And two, playing a game turns on the power-hungry Nvidia GeForce RTX 2060 GPU instead of using the AMD Ryzen 9-4900HS’ less power-consuming integrated graphics card. However, if you have a decently long commute time to work or school, the Zephyrus G14 should still be able to survive a play session of Doom Eternal.

When turning the test down to something less-intensive, the Zephyrus G14 still managed to provide a shocking result. At 150 nits of brightness with Airplane mode turned on, I played Hollow Knight at 1080p and the battery once again lasted 1 hour and 40 minutes.

It’s mind-boggling how the Zephyrus G14 scored the same run time on the Hollow Knight test vs. the Doom Eternal test. Turning down the brightness didn’t help, so we imagined that the bulk of the power consumption is due to the RTX 2060 GPU.

Then, we were slapped in the face yet again. When we tried running Hollow Knight for a second time with the same parameters but relying on the Radeon graphics instead of the RTX 2060 GPU, the results were exactly the same.

A closer look at the Zephyrus G14

What makes the Zephyrus G14 different from other laptops is the brand-new AMD Ryzen 9-4900HS processor it’s toting around. We already know this, but what does that have to do with battery life? Everything.

The AMD Ryzen 4000 U-Series chips are designed for power efficiency. AMD Senior Product Manager Scott Stankard gave us a deep dive on the battery life increase that the new Ryzen chips would deliver.

“The difficulty with managing power in a laptop is that there are many different actors giving us input all at the same time,” Stankard said.

He went on to talk about how each user’s performance settings are different and how that also complicates things. However, the Ryzen chip is equipped with “multiple sensors throughout the system” that give AMD feedback and it takes “all that feedback together and [tries] to decide what is the right power state to be in at any given moment.”

The new AMD Ryzen chips offer faster and more accurate clock control. That’s tech speak for: the processor will use the right amount of power for the task and do it at a faster rate, instead of increasing slowly to 100%, which would cause the battery to drain faster.

The next thing AMD talked about was better allocation of power budget. That means the CPU can get the components of your laptop to a low power state faster than usual, and vice versa, to get your system up and running. The chip also reduces the penalty of power state transitions, so there’s even less battery loss when you change your performance settings.

So how does all of this translate into our tests? Well, our initial battery test judges continuous surfing on the web, so both GPUs are in those low-power states that AMD described. But once we turned a game on, regardless of the GPU, they went full force to ensure that the game would be up and running.

Now, where does this leave the longest-lasting gaming laptop that can only last 1 hour and 40 minutes while gaming?

A peek into the future of gaming laptops

And yes, we understand that this battery life is only achievable when you’re not gaming, but once the rest of the major gaming brands, like Alienware and Razer, follow suit with double-digit battery life, then we can move forward into Phase 2. That’s when gaming laptops start to last 3 to 4 hours while gaming. And then eventually, 5 to 6 hours, and so on.

The future is very much here. And with gaming laptops like the MSI GE66 Raider and MSI GS66 Stealth coming through with 99.9WHr batteries, I have nothing but hope for gaming laptops to achieve these goals. AMD and Asus proved that it’s real -- now, everyone else needs to compete.