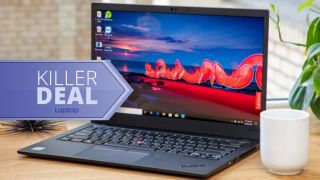 The ThinkPad X1 Carbon is the best business laptops we've ever reviewed. Outside of major holidays, it rarely drops below $1,000. That's why we're psyched about today's epic deal.

For a limited time, Lenovo via eBay has the Lenovo ThinkPad X1 Carbon (Gen 7) on sale for $949.99. That's $50 cheaper than it was on Black Friday and it undercuts Lenovo's current price by $250. It's one of the best laptop deals we've seen so far this year.

We tested the 1080p and 4K display options and found them both to be bright, vivid and detailed. The 1080p model offers better endurance and lasted 9 hours and 30 minutes on our battery test, which involves continuous web browsing over Wi-Fi at 150 nits. (The 4K model lasts just 5 hours and 33 minutes).

There is one caveat to keep in mind: Lenovo just debuted the 2020 version of its ThinkPad X1 Carbon. (Make sure to check out our Lenovo ThinkPad X1 Carbon (8th Gen) review for our hands-on tests). However, the 2020 model starts at $1,745, which makes today's deal one of the best laptop values you'll find right.