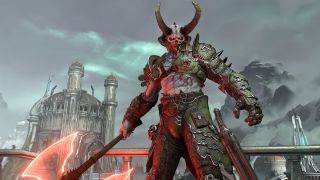 Doom Eternal is getting closer and closer by the minute, as it is set to launch on March 20. If you haven't played the original Doom (2016), now is your chance, as it just dropped from $20 to a measly $5.59 on Fanatical's website.

If for some reason you're unfamiliar with Doom -- it's a whole lot of ripping demons apart with your bare hands, popping their heads off with Super Shotguns, and slicing them in half with chainsaws. If that sounds like your type of game, then Doom (2016) is the one for you.

I played Doom (2016) on Xbox Game Pass and it was a wonderful experience. While it most definitely is an anxiety-inducing bullet-hell, the game gives you so many tools to combat your opponents that you feel truly powerful. That is, until a stupid little Pinky charges at you and ends your run (UGH).

At first, I didn't think I would be into Doom (2016) because it didn't seem to have much of a story. While that ended up being true, it does have one hell of a personality. Doom Slayer doesn't say a single word in this game, but he is the sassiest mother trucker you'll find on Mars.

And the most important reason to play Doom (2016) before Doom Eternal is that whatever little story the previous Doom had will get expanded upon in Doom Eternal.

I'm looking at you, readers and colleague editing this article right now, buy and play Doom (2016) now while you have the chance. Or you know, just pick up Xbox Game Pass and play it there, too.

If you've already played Doom (2016) and are interested in preordering Doom Eternal, you can do it on Steam and you'll get a digital download for Doom 64, a Doot Revenant skin, a Throwback Shotgun weapon skin and a bonus campaign level called Cultist Base.

If you want to buy the Digital Deluxe Edition, you'll get the Year One pass, which gives you access to two campaign DLCs, a Demonic Slayer skin, the Classic Weapon Sound Pack and Throwback sound effects for all your Doom Eternal guns.