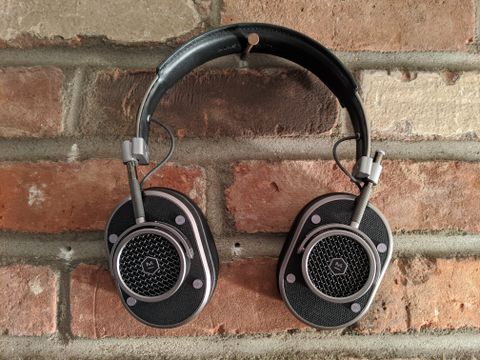 The Master & Dynamic MH40 Wireless is a minor upgrade that could benefit from extended battery life and functionality.

Several years after its critically acclaimed debut, Master & Dynamic gives its flagship headphones the cordless treatment with the MH40 Wireless. These beautifully crafted, retro-looking cans introduce minor upgrades such as Bluetooth 5.0, new controls, and a slightly lighter frame. The company has also swapped out the drivers to deliver cleaner, full-bodied sound.

As welcome as these additions are, the MH40 Wireless takes a hit in other areas that make it a tough sell for $249. Bass is less emphatic than its predecessor, while the lack of noise cancellation and mobile app support make these headphones feel slightly outdated when compared to modern releases.

If you’re looking for swanky wireless headphones with better audio that fall in the luxury range, we highly recommend the Sony WH-1000xM3, which we often see discounted. Otherwise, consider M&D’s latest release if you value elegant sound and comfort in a sophisticated package.

The Master & Dynamic MH40 Wireless is sold for $249 at major online retailers, including Amazon and Best Buy or directly from Master & Dynamic. Oddly, the wireless version is sold for the same price as the standard MH40 wired version, at least for the moment. The headphones are available in three colors: Black, Brown/Metal, and Gunmetal.

What's in the box?

Master & Dynamic ships the MH40 Wireless with a USB-C to 3.5mm cable, a USB-C to USB-A charging cable, a canvas carrying case, and a postcard that illustrates the company’s New York City store location on a map.

M&D’s commitment to crafting attractive headphones has made them a favorite among audiophiles with refined taste and style. The MH40 Wireless boasts an industrial aesthetic and premium materials, culminating in a unique and handsome design. It’s impossible not to admire these upon unboxing them.

A luxe blend of anodized aluminum, coated canvas, and lambskin leather makes up the entire build. The aluminum is assembled well and is incredibly durable. I also love the smooth finish on the leather earcups, which caresses the skin and attributes to the headphones’ comfort (more on that below).

What really makes the MH40 Wireless an eye-grabber are the details. Whether it’s the laser-etched number settings on the extenders or the trademark metal grilles on the face of each ear cup, there is so much pleasure to be had admiring these mechanical-looking cans. Look closely and you’ll discover hidden details on the cylindrical barrels that add to the headphones’ distinctiveness; one side even has the coordinates to NYC’s Grand Central Terminal stamped on it.

M&D packages the MH40 Wireless with sleek accessories, though the selection is smaller than what comes bundled with the MW65 noise-cancelling headphones. The canvas carrying bag looks great and has unique features like a zipper pocket on the front to store extra cables, along with magnetic closures to safely conceal the cans inside when traveling. It’s also spacious and can store other EDC items. I’m fond of the woven aux and USB-C charging cables as well, which look and feel premium. Another detail that shouldn’t go unnoticed is the mini Velcro strap that accompanies both cables for better organization.

Sturdy components often add extra weight. The MH40 Wireless is listed at 9.7 ounces, which is lighter than the original model, but heavier than most noise-cancelling headphones. Yet, somehow, the MH40 Wireless has a very light feel to it and won’t weigh down your head or shoulders when worn around the neck.

The headband does apply pressure on the skull, but it’s only an issue when wearing the headphones at the shortest setting: zero. Placing the extenders at 2 or 3 provides plenty of breathing room and rests the MH40 Wireless firmly atop the skull. Those with larger heads may find the max setting (4) snug, and others will notice how loose it makes the headphones, causing them to slide around.

The earpad cushioning presses gently on the ears for a soothing and relaxed fit. The on-ear design provides some great ventilation as well, giving your ears enough air to prevent moisture buildup. Depending on your ear size, you might find the earcups too small, which can create a cramped environment for larger ears. I had no issues with this and sported the headphones for 2 hours daily without experiencing any fatigue or slippage.

I developed a love/hate relationship with the controls. The buttons blend beautifully into the design and have great tactility to ensure intended commands are executed. At the same time, they are too small and difficult to locate at times; splaying them behind the cylindrical barrel on the right earcup is an awkward decision. The power/pairing button sits flush on the bottom of the earcup next to the USB-C port.

While the digital assistant works fine for performing hands-free commands via Google Assistant and Siri, I ran into some issues with the feature. Whatever I had playing on Apple Music would still be on in the background when Siri responded to inquiries. Google Assistant also had trouble recognizing basic questions; I asked it “When is my birthday?” and the program interpreted this as “It’s my Birthday!” and started a singalong.

Since coming on the scene, M&D’s audio performance has not disappointed. From the rich and warm MW65 to the loud and dynamic MW07 Go, the company has put out some of the best-sounding wireless headphones and earbuds. The MH40 Wireless guarantees a pleasant listening experience, but it’s definitely a step down from what we’re accustomed to hearing from the brand.

Pressing play on Anderson .Paak’s “Room in Here,” the headphones did a wonderful job with reproducing some of the record’s key elements, from the airy adlibs, which are usually lost on most bass-forward headphones, to the melodic piano keys. The midrange is on-point with Paak’s vocals smoothly skating across the percussive production.

M&D headphones usually lend themselves well to most music genres, especially Jazz. It was joyful vibing out to Sonny Rollins’ “St. Thomas,” as the calypso-inspired patterns and saxophone play sounded exceptional. The results remained impressive when pulling up Latin Jazz classics like Eddie Palmieri’s “17.1,” which demonstrated clean instrumental separation, giving every conga drum, horn, string, and hi-hat a detailed presence over the infectiously rhythmic instrumental.

As beautiful as most records sound on the MH40 Wireless, that’s not the case with all. The lack of bass on these cans will disappoint EDM, hip hop, and rock enthusiasts. Dr. Dre’s brassy horns and pounding drums on Eminem’s “Medicine Ball” feel more like jabs than uppercuts, which sonic heavyweights like the WH-1000xM3 deliver. Even other on-ear models like the Grado GW100 produce compelling lows that blend nicely with sharp-sounding mids and highs.

Bass isn’t completely absent. You just need to listen in wired mode in order to enjoy it. I was able to feel the kicks and snares on A Tribe Called Quest’s “Bonita Applebaum” a whole lot better when plugging the headphones into my MacBook Pro, which was relieving.

It turns out M&D stuffed 40mm drivers into the MH40 Wireless instead of the 45mm drivers featured in the wired version. Whether or not this is the reason for the less-than-stellar bass output is unknown. We’re also unsure whether these are the same custom beryllium drivers as those found in the MW65, which gave bass-heavy songs a boomy resonance. All I can say is the MH40 Wireless doesn’t demonstrate the same performance.

Though the MH40 Wireless doesn’t come with active noise cancellation, the headphones do a superb job of isolating external sounds. Indoors, I barely noticed my fiancée partaking in Zoom calls right across from me. The headphones also provided a peaceful, distraction-less listening experience when walking through the New York City streets. High-frequency sounds like police sirens were muffled and did little to pull me away from my music.

On-ear headphones are known for leakage and the MH40 Wireless is no different, as this model bleeds out sound at a high level. The local barista noticed I was blasting music, and though he couldn’t identify the song I was playing, he definitely took notice of the percussive sounds.

M&D rates battery life at 18 hours, which was really about 15.5 hours during my testing; heavy streaming, Skype calls, and high volume sucked up a lot of juice. By comparison, that is slightly higher than the GW100, but still much lower than noise-cancelling headphones ranked low on the battery life totem pole such as the Bose QC35 II (20 hours) and Sennheiser HD 4.50 BTNC (19 hours) – with ANC on.

To help preserve battery life, M&D programmed a power-off feature that automatically turns off the cans after 10 minutes of inactivity. The MH40 Wireless supports quick charging to get you about 9 hours in 30 minutes and a full battery after 80 minutes, which is perfect for weekly commutes, though you’ll need to carry around a USB-C portable charger if you’re planning a trip across the globe.

The MH40 Wireless is fine for jumping on conference calls at home, but it isn’t designed for taking them outside. I spoke with my fiancée on several occasions during grocery runs, and though she was able to hear me for the most part, she also noticed the ambient noise around me. This included an argumentative couple that passed me, dump trucks, and some wind, showing me how sensitive the mics were to background noise. It was more serviceable for answering Skype calls in my living room, with many of my colleagues stating they heard me loud and clear.

Connectivity has never been a strong point for M&D, but the brand has made some strides recently with its wireless earbuds, which seems to have carried over onto the MH40 Wireless. Bluetooth 5.0 performs moderately well, offering the listener a strong connection with a fairly long wireless range; expect up to 40 feet before dropout occurs. The headphones also pair (and re-pair) quickly with recognized devices. Adding to the headphones' wireless capabilities is multipoint technology, letting you connect to two devices simultaneously. It is functional, but there is one caveat: lag. I noticed a 2- to 3-second delay when switching from Apple Music on my MacBook Pro to Spotify on my Pixel 3XL.

The Master & Dynamic MH40 Wireless is a plausible reissue of the company’s original headphone that combines trademark craftsmanship with strong wireless functionality. Sound is airy and detailed, allowing you to take in the subtle nuances in orchestral recordings. Bluetooth is more powerful than on some of the brand’s previous releases, guaranteeing stable connectivity across multiple devices when streaming media. And what’s not to love about the stylish, steampunk-like design?

However, the MH40 Wireless is not a full-on upgrade, at least not in our eyes. Certain flaws like the subdued bass, shorter-than-average battery life, and absent features will leave you wanting more, especially for $249. Models like the WH-1000xM3 offer personalized sound and noise cancellation for a little extra, but if you want wireless headphones with a singular look and spacious sound, the MH40 Wireless might be worth the look.