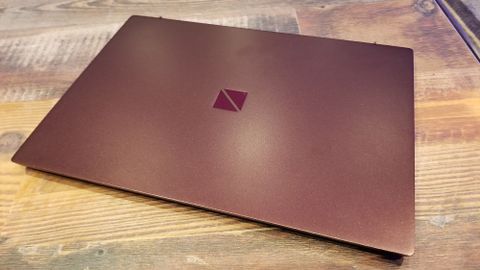 LAS VEGAS, NV - Lenovo has been mighty busy. In addition to its usual lines of laptops, the company is teaming with NEC to launch a line of Lavie devices. Available in March 2020, the partnership is yielding a laptop: the Lavie Pro Mobile (starting at $1,599) which weighs less than your current favorite ultraportable laptop.

The $1,599 Lavie Pro Mobile is outfitted with an 8th Gen Intel Core i7-8565U processor, which might mean the companies are looking to incorporate Intel’s vPro technology. The laptop also has 8GB of RAM, a 512GB M.2 PCIe SSD and an integrated Intel UHD 620 GPU.

Holding the Lavie Pro Mobile will make you do a double take. It's so light that it feels like it should be hollow inside. But no, there's a fully operational laptop on the interior. But just how light is the Pro Mobile? It's a waifish 1.8 pounds. I know because I personally weighed the barely-there system. However, Lavie definitely made some sacrifices to make weight, namely going with an Intel 8th Gen CPU instead of 10th gen.

And how did Lenovo and NEC manage to make such a slim notebook? By using ultralight components. The laptop’s lid is made from racing car-grade carbon fiber with the rest of the system being constructed from magnesium-lithium alloy. And to further boost the design, the laptop is colored in a striking Bordeaux. However, Lavie definitely made some sacrifices to make weight, namely going with an Intel 8th Gen CPU instead of 10th gen.

However, Lavie definitely made some sacrifices to make weight, namely going with an Intel 8th Gen CPU instead of 10th gen. It puts the laptop as a serious disadvantage when it comes to performance.

Like the majority of the notebook, the keyboard is made of magnesium-lithium. The laptop features a lift-up hinge to slightly raise the keyboard for a more comfortable typing experience. The keyboard is better than the last time Lenovo created a Lavie laptop, the Lavie Z. While I initially liked the feel of the Lavie Z’s keyboard, I was quickly frustrated by the undersized island-style keys with their undersized key travel.

With a 49 watt-hour battery, Lenovo and NEC are claiming the Lavie can last 15 hours on a charge. I’m definitely eager to put that to the test in the Laptop Mag labs.

The Lavie Pro Mobile is a beautiful laptop, but its biggest selling point is its unbelievable weight. At 1.8 pounds, it could be a big asset to on-the-go mobile professionals who need to travel extremely light. It's slim and stylish to boot. However, I'm not thrilled that I have to settle for an 8th Gen processor to get all that featherweight goodness. And if I had to get 8th Gen, at least give me vPro for an extra layer of security.

Still, I'm eager to see how the Lavie Pro Mobile stands up to the competition in what's becoming an increasingly crowded market.