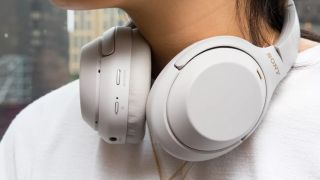 Sony is the only company to truly challenge Bose in recent years in the noise cancelling headphone space with its WH-1000XM-series line. Excuse the lengthy name because these cans have proven to be among the best noise-cancelling headphones over the past several years.

Now the company is readying a new model, the Sony WH-1000XM4, and they already appear to be a huge upgrade over anything we've seen thus far. Twitter user JustPlayingHard posted details about the upcoming headphones, including some interesting new features.

Uncovered in a thorough investigation of an APK (Android Application Package), the WH-1000XM4 features include the ability to connect to multiple devices at once, so you can quickly switch sources.

This addresses one of our main complaints with the WH-1000XM3. If multi-source playback arrives on the upcoming headphones, it means you can play audio from your phone then quickly switch to audio playing through your laptop without having to disconnect a device. Unfortunately, only two devices can be connected at once and the Hi-Res Audio LDAC codec won't be supported on multi-point pairing, so you might get better audio quality when connected to only one source.

Another fascinating feature, called Smart Talking, will automatically enable ambient listening mode when a voice is detected. This is similar to the Ambient Sound Mode on the current WH-1000XM3 except that instead of holding your hand over the right earcup to allow noise to passthrough, it will do so automatically when voices are detected.

It'll be interesting to see how Sony implements this feature. I can't imagine a way for the headphones to know which voices you want to hear and which ones you want to silence. Still, I'm hopeful that Sony has thought up a clever method.

The folks at XDA Developer gave us a taste of what Sony might have cooked up: "users will also be able to adjust the voice detection sensitivity from Auto (based on ambient sound), High, or Low in case users find that it activates too often (such as when the person speaking is close by) or too little (such as when you’re in a vehicle). You can toggle this setting either from within the app or from (likely) the NC/Ambient button on the headphones."

Another noteworthy feature changes the level of noise cancellation based on your location. This might sound familiar, but in the WH-1000XM4 it's automatically done using Google Maps.

As for sound quality, the WH-1000XM4 will have enhanced upscaling through something called DSEE Extreme. This should improve the sound quality when you're playing low-quality audio files.