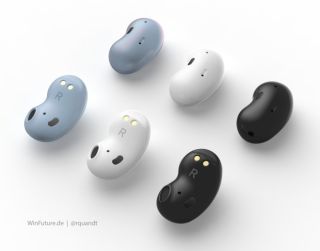 Samsung's rumored follow up to the well-liked Galaxy Buds Plus are going to take some getting used to thanks to the unique bean-shaped design, but if the latest rumors regarding the specs and pricing prove true people are going to get over those looks quickly (via 9to5Google).

According to a report out of South Korea, the expected price point is at or below the $150 MSRP of the current Galaxy Buds Plus. And what makes that particularly notable is the supposed inclusion of active noise cancellation (ANC), a feature that has commanded $200+ pricing from premium brands to date.

A recent trademark filing with the EU and UK Intellectual Property Offices suggests that the name might be Galaxy BudsX, similar to the reasonably well-regarded Samsung Gear IconX earbuds.

Given the design of these earbuds, particularly the lack of a silicon tip, it is difficult to see how they will create an adequate seal for most users to offer the kind of superior active noise cancellation found in wireless earbuds like the Apple AirPods Pro or Sony WF-1000XM3. However, as again we haven't seen a design like this previously it's possible Samsung has found a way to make it work.

Additional design details from the same source have put the Galaxy BudsX at 28mm long and 13mm wide, although reportedly the company is working to reduce these further. This is both shorter and narrower than the AirPods Pro for example, but again as you are seating the entire earbud in your ear that is to be expected. The case is reported to be quite slim as well at 26mm thick.

All of these reduced dimensions do start to raise some concerns regarding the battery life for these earbuds, but there has been no information to speak of there just yet.

Not helping these concerns are some of the other potential features for the Galaxy BudsX which according to the trademark description could include "software for measuring distance, speed, time, changes in heart rate, activity level, calories burned." As is always the case with trademarks, these aren't guaranteed to be part of the product when it is released, but it's an impressive collection of features, and given the fit of the product they certainly seem like they would make for solid fitness headphones.

As you can probably guess from the reference to potential changes to the size of the earbuds as well as the fact that they are expected to overlap in price with the just recently released Galaxy Buds Plus, the Galaxy BudsX likely won't be arriving until sometime next year. We'll be keeping a careful eye out for any new rumors though, as Samsung has piqued our interest with the design and impressive specs list.