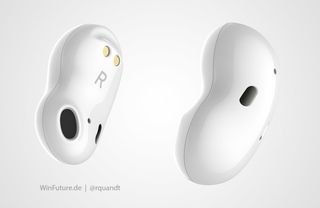 Samsung already makes some of the best AirPods Pro alternatives in the excellent Galaxy Buds Plus. Now a new report from WinFuture suggests the Korean tech giant is readying a new pair of wireless earbuds with a radical design that is unlike anything we've seen before.

Well, at least anything we've seen in the tech world. The bean-shaped design of these wireless earbuds is meant to contour to the inside of your ear like AirPods but without the unsightly stem. Of the legumes, these buds are most similar to kidney beans, with a tapered center and bulbs on each end.

Codenamed "beans," the 1.1-inch earbuds feature a speaker hold and sensor on the inner ear and microphones and vents on the outside. Magnetic pin connectors for charging can be seen on the top inner portion of the buds. Like the AirPods, these rumored earbuds don't have any silicon tips or wings, so the shell will make direct contact with your skin.

Based on renders and images, the buds look quite discrete, which is more than I can say about most wireless earbuds. But as nice as they might look, I'm worried about how they will fit snugly in your ear. A deep seal when listening to in-ear headphones is critical to getting the best sound quality and noise isolation.  The AirPods Pro is proof -- while the buds sound great, competing earbuds with a deeper insertion are capable of producing heavier bass and a more intimate soundstage.

I'm also wary about how difficult it might be to take them out of your ears, although enough R&D should lead to a solution, whatever it might be.

It's possible these bean-shaped buds will be Samsung's fitness line of wireless earbuds. That would align with previous rumors that suggest the earbuds can track your heart rate, speed, distance, and other fitness-related metrics. If true, the upcoming wireless earbuds might live alongside the current Galaxy Buds Plus, rather than replace them.

The Samsung earbuds are still being tested, according to WinFuture, so they might not arrive for several months, if at all. I like the idea of earbuds that feel as comfortable as the AirPods Pro but don't look as dorky, so let's hope Samsung finds a way to bring these to market.