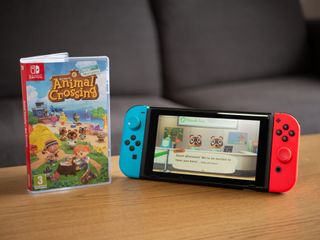 Tons of Nintendo Switch games are on sale in Nintendo's eShop this weekend. Right now, you can save up to 50% off select adventure titles like Final Fantasy and Trials of Mana.

Generally speaking, the Nintendo eShop offers great digital Switch games on any given day. If you're looking for physical Switch game deals, retailers are currently discounting a broad range of titles.

In fact, we're currently seeing some of the best Nintendo Switch deals of the year. So If you want to spice up your Switch library with new games, you've come to the right place.

Here are the best Nintendo Switch game deals you can get right now.

Diablo 3 Eternal Collection: was $59 now $47 @ Amazon
This installment includes all previously released content for Blizzard’s addicting loot-collecting slasher. You and up to three friends cam slay your way through both the core game and Reaper of Souls collection as one of 7 different classes. View Deal

AO Tennis 2: was $40 now $19 @ Amazon
AO Tennis 2 is the only tennis experience designed for and by its community. Create your own players, stadiums and legendary matches. Own it now for its lowest price yet.  View Deal

Carnival Games: was $39 now $14 @ Amazon
Carnival Games features fan favorites and brand new mini-games. Fun for everyone, you can play alone or with up to three others. Save $25 on this physical game at Amazon. View Deal

Mario + Rabbids Kingdom Battle: was $59 now $28 @ Amazon
This delightful and surprisingly deep strategy game is one every Switch owner should play. Kingdom Battle stays true to both franchises and mashes together Mario's colorful worlds and the Rabbids' potty humor.View Deal

NBA 2K20 for Nintendo Switch: was $29 now $19 @ Best Buy
NBA 2K20's enhanced MyCareer mode packs a star-studded cast including Idris Elba and Rosario Dawson. And for the first time, all 12 WNBA teams and over 140 players are in the game. At just $19, it's one of the best Nintendo Switch game deals we've seen outside of the holidays.
View Deal