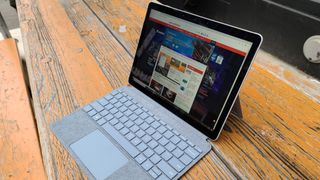 To the extent the tablet market is still a thing in this age of superpowered, supersized smartphones, it hasn’t been easy for anyone to break Apple’s hold on it. But if the iPad still looms large over the category, that doesn’t mean competitors have given up.

With the Surface Go 2 (starting at $399), Microsoft is continuing its assault on Apple’s front lines by offering something not easily found in Cupertino: Windows. The argument seems to run that if you want to actually do something on your tablet, but you don’t want to have to spend a ton of money on an iPad Pro, this is your best bet.

Maybe. We weren’t completely convinced when Microsoft released the first-generation Surface Go in the summer of 2018, given its terrible battery life, a few questionable design choices, and the expensive add-ons necessary to maximize its computer-replacement potential. (Okay, so it bears some resemblance to the iPad.)

The good news is that the Surface Go 2 fixes a lot of what was wrong with the original. The bad news is that it is still unlikely to replace a real PC system on your desk or in your briefcase.

Below are our first impressions of the Surface Go 2. You can expect a full review in the coming days.

One glance is all you need to know that the Surface Go 2 is the kid brother of the Surface family. Measuring 9.65 x 6.9 x 0.33 inches, this model is almost identical to its predecessor in terms of dimensions. It looks the same, too, with a sleek-industrial silver magnesium case adorned with a reflective Microsoft logo on the back.

The port complement is likewise identical, with a microSDXC port on the left edge of the screen and the Surface Connect port (for charging and docking), one USB Type-C port, and a headphone jack on the right. The Power and Volume buttons are on the top.

Microsoft’s familiar Surface integrated kickstand makes a return appearance as well; it lies flush against the back for use in tablet mode, but swing it out (there are indentations on either side) to more easily view the screen at whatever angle is most comfortable for how you’re sitting. Because the kickstand is on the thin and sharp side, it doesn’t feel especially stable on your lap; it’s better suited for use on a desk.

The 1.2-pound weight of the Surface Go 2 (only a hair heavier than the earlier one) is hardly back-breaking, but it’s noticeably heavier than Apple’s iPad, iPad Air, or iPad Pro 11-inch, all of which come in under 1.1 pounds. Add a Signature Type Cover (see below) and you’re coming in above 1.7 pounds—still not untenable, but a bit weighty nonetheless.

One of the major differences in the Surface Go 2 is something many will see as a major improvement: the display. The earlier tablet’s unusual 10-inch, 1800 x 1200-resolution screen was outlined by incredibly thick bezels, making it look small and inefficient.

But thanks to its 1920 x1280 resolution, the Surface Go 2’s 10.5-inch PixelSense display appears more conventional and comfortable. Microsoft freed up that extra space by shrinking the bezels significantly (to about 15/32nds of an inch on the top and bottom and 13/32nds of an inch on the sides), giving a smarter, cleaner impression.

The screen itself doesn’t look bad and is sufficiently bright for viewing in both indoor and outdoor settings. (It averaged about 408.2 nits of brightness in our tests with a Klein K10-A colorimeter.) It was about average in terms of color reproduction on the sRGB gamut, covering 107.4 percent; that’s slightly better than last year’s iPad but less impressive than we saw with the first Surface Go. On the DCI-P3 color gamut, which is a newer and more demanding standard for digital video, it covered only 76.1 percent.

One thing hasn’t changed with the Surface Go 2: the keyboard. Its Signature Type Cover is still a separate add-on, and, as priced from $99 to $129, it’s not a cheap one. The $129 one included with our review unit, colored Platinum and using Alcantara (per the description on the box, “a unique and innovative material used in high-end luxury products”), was certainly attractive, blending a soft-touch gray for the cover and the keyboard deck and a slightly darker matte gray for the keys and the 3.8 x 2.2-inch touchpad. (The white backlight provided an appealing additional contrast.)

It’s not a patch on a full laptop keyboard, of course; the keys are too small and closely packed. But for something designed foremost for thinness, it’s not too shabby: The keys have travel pleasing enough that you won’t feel you’re pounding your fingertips on the desk, and they offer a dose of resistance that reads as serious without edging all the way into stiff. The glass touchpad clicks firmly but easily.

For drawing and annotation purposes, Microsoft also offers the Surface Pen—though it will run you another $99. We didn’t get one this time, and didn’t much miss it; the screen may be bigger, but there’s still not a ton of room for this sort of thing.

Microsoft has upped the processing punch to the Surface Go 2 in the form of a new processor option: an Intel Core m3-8100Y CPU. Though its base clock is slower (1.1GHz) than the original’s Intel Pentium Gold 4415Y, it offers a maximum Turbo frequency of up to 3.4GHz, along with minor tweaks in other areas. You can expect better performance this time around—Microsoft claims up to 64% faster performance, in fact.

Other configuration options include 4GB or 8GB of RAM and storage in the form of a 64GB eMMC or a 128GB SSD. Our review unit came equipped with both, giving us the best view on the top-end performance you can expect from the Surface Go 2. With all this, Microsoft’s preloaded software (which, in addition to the Edge browser, included the usual suspects of the Microsoft 365 lineup) opened just fine, if perhaps with the faintest bit of sluggishness—luckily, not enough to disrupt your experience.

For your connectivity needs, there’s support for up to 802.11ax, aka Wi-Fi 6, so you’ll have access to those blazing-fast speeds (assuming you have a compatible router in the proper environment for reaching them); you can also add an LTE Advanced modem if you want to get on the Internet from anywhere. (This marginally increases the Surface Go’s weight, but chances are you won’t notice.)

We’re in the process of putting the Surface Go 2 through our usual litany of benchmark tests (we had to switch out of S mode, you realize); we will update this review once we have more performance numbers to pass along.

Microsoft touts “up to 10 hours of battery life based on typical Surface device usage,” which the company measures using a combination of Web browsing and productivity chores, interspersed with idle time. We haven’t had time yet to complete our battery test, which loads a series of Web pages continually from a centrally located server, but we’ll report back as soon as it’s finished.

For what it’s worth, we do hope it will top the first Surface Go, which lasted a measly 6 hours and 6 minutes on our test — way behind most other tablets of this type.

As before, cameras are a critical feature of the tablet. There are two front-facing cameras, one specifically for signing in with Windows Hello and another 5MP camera for doing video calls (a necessity these days), as well as an 8MP rear-facing autofocus camera for taking pictures and video. The last two cameras both support up to 1080p resolution and are accompanied by dual far-field Studio Mics designed to “increase voice clarity and reduce background noise.”

The 8MP camera took acceptable photos of ordinary scenes with a good balance of colors and light but faltered when pushed further. White flowers looked blown out, even in photos taken outdoors in favorable (if overcast) lighting conditions, and there could be slight bleed between very light and very dark areas in an image.

Low-light photos were distractingly noisy; I don’t recommend taking them unless it’s an emergency, as your phone probably takes better low-light photos (my Samsung Galaxy Note 10 Plus sure does).

The 2-watt stereo speakers sport Dolby Audio Premium, and turn out decent sound at tablet-appropriate volume. (Do not plan on filling any rooms with music piped through from this.) The throbbing bass intro to The Knife’s “Silent Shout” came through clearly and without distortion, though on another treble-heavy selection at maximum volume, a touch of muddiness did creep in. Keep the levels lower, and you should be fine.

The Surface Go 2 defaults to running Windows 10 Home in S mode, which you may find reassuring or restrictive depending on how you use computers. S mode is designed to optimize system startup and app launch times, as well as boost security, so you don’t have to wait to get going or worry too much once you are. Casual users, safety-conscious users, or younger users (or their parents) might appreciate this functionality, which positions the tablet closer to the Chromebook usage model than most Windows 10 machines can manage.

As with Chromebooks, however, there’s a trade-off: While in S mode, you can only run verified apps from the Microsoft Store, something that may be frustrating if you want or need software only available via the Web. For example, none of our usual testing applications, which we run on hundreds of laptops and tablets every year, would work on the Surface Go 2 out of the box. You can switch out of S mode to use traditional Windows 10 Home, but even that comes at a cost: You can never go back into S mode again.

This is something important you’ll have to decide about your Surface Go 2 sooner or later. I found it frustrating, even for a low-cost Windows device, but you may find it worth it if Windows Store apps better fit into your personal workflow.

If a Windows tablet is ideal for you, the Surface Go 2 blends power and portability better than any you’re likely to find. The changes made from the previous model are few but impactful, and its high degree of configurability means you’ll be able to get exactly the version you want—whether you plan on using it primarily as a media-consumption device or using it for real work (something that doesn’t come easy with Android tablets or lower-end iPads).

Just remember: If you go the latter route, you’ll still have to shell out a lot more for a keyboard and pen, bringing that tantalizing $399 base price much closer to $600—and driving it straight into laptop territory, where the price-performance ratio also keeps getting better and better. The Surface Go 2 doesn’t always seem to have a natural place to live.

Rightly or wrongly, Apple has defined the tablet and forced everyone else to play catch-up—and found creative ways to work around what it doesn’t always do well at this size and price. The Surface Go 2 doesn’t quite do the same, but if you want a generally affordable tablet that pairs a handsome, intelligent aesthetic with a productivity-focused OS and features, and you can live with the limitations, this tablet brings Microsoft at least a little closer to Apple World.