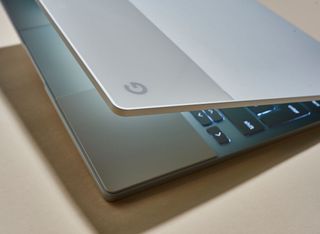 We might not get the flood of dual-screen laptops we were expecting this year after Microsoft delayed Windows 10X, but an unlikely source could fill the void.

Google is possibly developing a Chromebook with a dual-screen setup, according to code spotted by 9to5Google. If you look closer, code change notes describe where the screens are on the device: "There are two touch screen controllers on the Palkia device. One is on the lid; another is on the base."

So, what does that mean? Taken literally, the device, codenamed "Palkia," could have a regular touchscreen inside the lid and another outward-facing one on the exterior. It would certainly be a strange setup but not dissimilar to the Lenovo ThinkBook Plus, which has an E-ink reader on the lid.

Interestingly, tablet mode is disabled in Google's code, suggesting this laptop will only operate as a traditional clamshell. That dashes our hopes of a Chromebook with two main displays (an ordinary one and another on the deck) and a flexible hinge, like the Dell Concept Duet, Microsoft Surface Neo or the strange prototypes Intel has shown off in the past.

Another theory is that Google is experimenting with a laptop similar to the Asus ZenBook Pro Duo, which pairs a standard display with a second screen located on the deck, just above the keyboard. Chrome OS benefits from being a simple, easy-to-use operating system, so Google would need to work some magic to keep it that way if it introduces complicated dual-screen hardware.

Before we start talking about Palkia like it's a laptop you can actually buy, we should point out that this is a prototype/experimental device. Google won't be releasing this mysterious dual-screen device anytime soon if it does at all. Even if the experiments go well, Google would need to optimize Chrome OS for dual-screen devices, which could be a multi-year project.

More proof that a dual-screen Chromebook is still years away comes from Chromium developer comments, one of which outright says "Palkia is not an OEM device." Meaning, no company has plans to mass-produce this thing and sell it to the public.

The good news for Chromebook users is that Google seems willing to explore new hardware options for Chrome OS. If Google sees the potential in a device with multiple screens and identifies benefits it could provide to Chrome OS users, then we could see a dual-screen Chromebook in the coming years.

If you can't wait that long, we've put together a list of the best Chromebooks, some of which are 2-in-1 devices that let you use them in laptop or tablet mode.