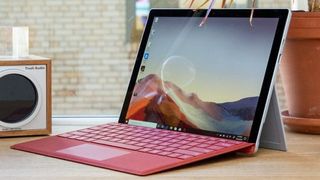 Microsoft's brand-new Surface Pro 7 is quickly becoming the hottest product this Black Friday season, and we just found the best deal on it yet. Microsoft is selling the Surface Pro 7 and Type Cover keyboard for $330 off. That's already an amazing deal but it gets better because a Surface Pen ($99 value) is included for free.

At checkout, you'll pay just $999 for the Surface Pro 7 (Core i5), the Type Cover keyboard and the Surface Pen stylus. In total, this deal saves you a whopping $430. We saw a similar deal earlier this month, but it applied only to the base model and didn't include the Surface Pen.

What's so surprising about this deal is that the Surface Pro 7 was released just a few months ago. In our Surface Pro 7 review, we praised the detachable tablet for its premium chassis, blistering performance and bright, vivid display. We also strongly recommended buying the Type Cover keyboard, which turns the Surface Pro 7 into a proper laptop replacement. It's also very comfortable to type on.

With this deal, you get both the Type Cover and the Surface Pen accessories, all while saving hundreds of dollars. If that wasn't enough, the discount applies to both the Platinum and Black Surface Pro 7 variants and you can choose from four Surface Pen colors: Burgundy, Platinum, Black and Cobalt Blue.

Deals like this one don't typically last very long, so you might need to act quick before it disappears.

If you're searching for more deals on laptops, tablets and accessories, see our Black Friday deals and Cyber Monday deals pages for all the latest discounts.