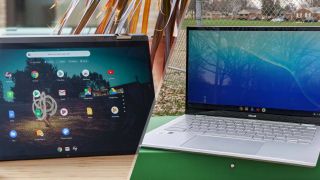 Asus made its mark on Chromebooks when it launched the Chromebook Flip C434 last year to critical praise (we gave it a 4.5-star rating). That $569 model delivered a sleek aluminum chassis, fast performance and a large, vivid display -- things that, at the time, were hard to find in a Chromebook. On top of that, the C434 lasted a full day on a charge.

Don't worry. We've put these two heavyweights against each other in a multi-round knockout fight to see if the Chromebook C434 retains its crown as the best 2-in-1 Chromebook or if its new sibling inherits the title.

There's not much to differentiate these two when it comes to design. They both have sleek, minimalist aluminum chassis, which are surprisingly portable given the laptops' 14-inch displays.

Asus typically splashes bold colors across its laptops, but not with these two Chromebooks. Opting for what is traditionally considered a premium look, Asus went with silver on the Flip C434 and "Aerogel White" (also available in silver) on the Flip C436.

The two notebooks look practically identical apart from the subtle color differences and some fancy metalwork done to the Flip C436's hinge; A narrow hexagonal cutout gives the laptop a regal elegance. The speakers were also moved from the front bottom of the Flip C434 to the sides on the Flip C436. Also, the Chromebook Flip C436 adds a fingerprint sensor to the keyboard, a rare feature for a Chromebook.

These are both 2-in-1 laptops, so you can rotate the screen back to convert them into tablets or prop them into tent mode for content viewing.

Asus sacrificed a USB 3.1 Type-A port to slim down the Flip C436's chassis. The slender shape is nice but, as someone who values function over form, I'm not convinced it was worth the connectivity trade-off.

On the left side of the Flip C436 is a USB-C port and a headphone jack while the right side houses a second USB-C input and a microSD card slot.

The older Flip C434 has the same port configuration except there is a USB 3.1 Type-A port on the left side.

Both laptops come with a 14-inch, 1080p display. While similar in many ways, the panel on the Flip C436 is more vivid, making it the one we'd grab for watching Netflix.

Asus tends to cap the brightness of its panel at or below 300 nits, which is a shame because 300 nits is the minimum we look for in a screen. The Chromebook Flip C436 and Flip C434 came in just below that mark, at 287 nits and 286 nits, respectively.

The touchscreens on these two laptops are responsive; I had no issues tapping links and swiping with my finger to scroll down an article.

Keep in mind that these are both glossy screens so you'll need to battle reflections when you take them outside or use them under harsh lighting.

You can expect a very similar typing experience with these two laptops. They both have shallow but clicky keys that are a tad stiff for my liking. The keys are well-sized and spaced, but their translucent font can be problematic for hunt-and-peck typists who rely on seeing those letters and numbers.

As for the touchpad, that goes to the Flip C436. Its extra-wide, 5.1 x 2.6-inch surface is smooth to the touch and allowed me to execute Chrome OS gestures, like pinch-to-zoom and two-finger swipes to go back and forward between pages. Along with its smaller size, the 4.1 x 2.4-inch touchpad on the Flip C434 was jumpy at times, although I had no problems with gestures.

Neither laptop comes with a stylus but you can buy an optional one if you prefer more precision when navigating via touch.

When Asus released the Chromebook Flip C434, it proved that you didn't need a Core i9 CPU to run Chrome OS at the level expected of a premium laptop.

Armed with a Core m3-8100Y CPU and 4GB of RAM, the Flip C434 has no problem running everyday tasks. However, if you want faster speeds for heavier workloads (like dozens of Chrome tabs), go with the Flip C436 for its beefier Core i3-10110U CPU and 8GB of RAM.

The proof of the Flip C436's dominance is in the benchmarks. On the Geekbench 4 overall performance test, the Flip C436 put up a 9,972, which crushes the 6,978 netted by the Chromebook Flip C434. That's the difference between topping or falling short of the category average (8,743).

Similarly, the Chromebook Flip C436 grabbed an impressive 102 on the JetStream test whereas the Flip C434 landed at 76.7 for JavaScript performance.

The integrated Intel UHD graphics in these machines aren't meant for gaming but basic 3D graphics programs and Android apps should run without a hitch. On the WebGL Aquarium test, the Flip C436 ran 5,000 fish at 46 frames per second, which is smoother than the 37 fps delivered by the Flip C434.

There Flip C434 earns the medal in the endurance round, but both of these laptops are winners in our book. The Chromebook Flip C434 lasted for 9 hours and 58 minutes in our Laptop Mag battery test, which involves continuous web surfing over Wi-Fi at 150 nits.

While the Flip C436 breached that 9-hour mark, it ran out of steam about a half-hour earlier, at 9:25. The average endurance of a mainstream laptop is 7 hours so we're thrilled with both results.

The new Chromebook Flip C436 squeaked out a victory against its older sibling. Minor improvements to the design, a more vivid display and faster performance make up for the missing USB-A port and higher price.

That said, if you're on a strict budget, the Chromebook Flip C434 gets you almost everything the Flip C436 offers, especially if performance isn't a huge concern. And if you absolutely need a USB-A port for connecting peripherals (and don't want to use a dongle) then you might get the Flip C434 regardless of price. In the end, it doesn't matter which laptop you go with, you really can't go wrong with either.