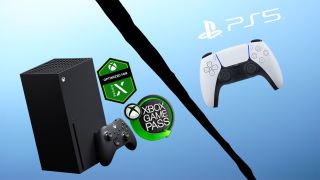 The PS5 and Xbox Series X are both on the horizon. After yesterday’s Xbox Series X games event, I can almost taste the Xbox Series X, while the PS5 still feels like a distant dream.

We know almost everything about the Xbox Series X. When it comes to the PS5, we don’t even know what the damn thing looks like. All we have is a convoluted deep dive into the specs, and a logo. Oh, and the DualSense controller, which is by far the most interesting thing. However, if this console wasn’t from PlayStation, I’d call it vaporware.

Here’s what the PS5 needs to beat the Xbox Series X:

First and foremost, you can’t argue that the PS5 is going to have games to combat the Xbox Series X. Why not? Because PlayStation is ditching three generations worth of libraries. Not only that, but not all PS4 games will be backwards compatible when the PS5 launches.

You could argue that not all games are currently compatible with the Xbox One. That's true, and something Xbox needs to work on with the Xbox Series X. However, Xbox is so ahead of the game that the Xbox Series X will arrive with an exponentially larger library thanks to its addition of three generations worth of games.

It’s clear that PS5 is behind and there’s probably nothing PlayStation can do between now and launch day to rectify that. But that’s okay. PlayStation can take its time as long as the brand commits to the console in the way Xbox has. It won’t be long until PlayStation ends up losing its lead and realizes that it needed more than next-gen games to back up the PS5.

One of the Xbox Series X’s killer features is Smart Delivery, which lets users buy Xbox One games and get a free upgrade to the Xbox Series X version of the game at the same time. It’s the equivalent of buying a PC game and retaining ownership even if you switched out your rig.

PlayStation hasn’t revealed much in the way of features for the PS5, so it’s unclear whether or not it will have something similar. However, it would be detrimental to PlayStation’s brand loyalty if it launched the PS5 without giving players a free upgrade for the cross-gen games releasing this fall and onward.

No one wants to buy the same game twice. Even EA knows that, in the company’s own rapacious ways. EA will be offering free upgrades for its games launching for the current generation and next-generation consoles. However, the company won’t take part in Xbox’s program, or PlayStation’s (if one exists). It will be through its own program, and with a constricted timeframe.

It's annoying, I know. However, take this as a clue. Even EA knows the value of brand loyalty when it comes to this cross-gen transition. The PS5 desperately needs this feature.

If you even think about PlayStation Now, I might just hurl. Gamers don’t need a cloud-based gaming service for a console that can perfectly run games on its own. PlayStation needs an Xbox Game Pass.

PlayStation Now recently hit 1 million subscribers. That sounds like a nice number, but not compared to Xbox Game Pass’ 10 million subscriber mark. And keep in mind that there are way more PS4 owners than there are Xbox One owners. Something needs to change.

PlayStation needs to either revamp its PlayStation Now service or offer a completely new service similar to Xbox Game Pass. From its extensive library of Xbox Game Pass games for console and PC to its Project xCloud program officially kicking off later this year, Xbox is so far ahead of the game that PlayStation doesn’t know which way is up.

The PS5 is more than likely going to deliver some awesome critically acclaimed games, but PlayStation needs to think about other services to offer players. My PS4 collects dust until an exclusive game launches. Thanks to Xbox, I can do all of my gaming on both console and PC.

To be fair, PlayStation has been making an effort to port its exclusive AAA titles to PC, like Horizon Zero Dawn and Death Stranding. But PlayStation needs to put more work in if it wants the PS5 to be as consumer-friendly as the Xbox Series X.

PlayStation is banking on its games to hit a homerun for PS5, but it doesn’t that it’s currently missing all of the key features the Xbox Series X is offering. If Xbox gets its groove back this generation with critically acclaimed exclusives, it could pull off a major upset.

If PlayStation needed to rebound from that, it would have to build a whole flurry of new features to catch up, and that’s bound to take a while since Xbox has been at it for years now. The PS5 needs to be a console built with consumers in mind -- a console as forward-thinking as the Xbox Series X.

If PlayStation can’t offer something to retain its brand loyalty, the PS5 is going to falter, and I don’t want to see that happen. From God of War to Horizon Zero Dawn, we all want to see our badass AAA exclusives succeed -- I want endless sequels and trilogies, damn it.