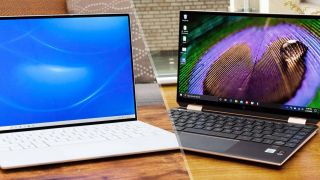 Ooowee, this is going to be a good one! It’s the Dell XPS 13 (2020) vs. HP Spectre x360 (13-inch), two of the best ultraportable systems in the industry. In one corner, you’ve got the 13-inch Spectre x360, which offers a sleek, versatile design, strong performance by way of its Intel 10th Gen Core i7 processor and over 13 hours of battery life.

In the other corner, you’ve got the Dell XPS 13, the most recent member of the 5-star club. The laptop is also powered by a 10th Gen i7 CPU, over 12 hours of battery life and a slick design that’s smaller and virtually bezeless.

Two award-winning laptops in an epic showdown. Which one will emerge victorious?

Is it a laptop or is it art? Looking at the Spectre x360, it’s pretty clear that the answer is both. And while the silver iteration of the aluminum laptop is nice, we’re especially fond of the Nightfall Black model with its gorgeous copper accents. The precisely chamfered edges are avant garde but functional, allowing easy access to the rear-mounted ports. Sturdy 360-degree hinges mean the laptop can easily transition from a traditional clamshell to a tablet to presentation mode and back.

Although it’s not a 2-in-1, the XPS 13 is still a lovely-looking laptop. The lid, made from Frost White anodized aluminum, is striking to look at. It’s cool to the touch and, thankfully, fingerprint resistant. We really like the interior of the Frost White version of the laptop as the keyboard deck is made from Dell’s proprietary Winter White glass-fiber weave.

As ultraportables get slimmer, port offerings are becoming smaller. But not with the Spectre x360. It’s one of the few laptops to still offer a USB Type-A port via an expandable “ drop-jaw” mechanism. You also get two Thunderbolt 3 ports, a microSD slot and headset jack. And some iterations of the laptop have a nanoSIM slot for cellular connection.

You might want to invest in a dongle or two with the Dell XPS 13 as it only offers a pair of Thunderbolt 3 ports, a microSD slot and a headset jack. Thankfully, Dell was wise enough to bundle a dongle with the laptop.

Dell has done the impossible –– it found a way to shrink all four bezels surrounding the display. That allowed the company to fit a 13.4-inch, 1920 x 1200 touch panel with a 16:10 ratio into a smaller chassis –– all without moving the webcam to an awkward location.

While the Spectre x360’s bezels are slim, they’re nowhere near the XPS 13’s, especially not the bottom chin. Slightly thick bezels aside, the Spectre’s 13.3-inch, 1080p touch panel is great to look at.

When we measured for color reproduction capabilities, the XPS 13 reached 115% of the sRGB color gamut compared to the Spectre’s 109%. The Dell also proved to be brighter with 417 nits compared to theSpectre, at 369 nits.

In addition to making the overall design smaller, Dell also managed to make the keycaps on the XPS 13’s edge-to-edge keyboard 9% larger than its predecessor. Fortunately, Dell didn’t sacrifice comfort in pursuit of design. The keys are well spaced with firm, bouncy feedback which helped me reach 75 words per minute on the 10fastfingers typing test.

That’s not to say the Spectre’s keyboard is uncomfortable. It’s just a little mushier than the XPS 13. Still, I managed to match my 70-wpm score on the typing test. My only other complaint about the Spectre’s keyboard is the backlighting isn’t as bright as the XPS 13’s, which makes it a little difficult to see the font in a dim room. It’s a small quibble, but one worth noting.

The Spectre x360 wins in the endurance category. The laptop lasted a whopping 13 hours and 20 minutes on the Laptop Mag Battery Test, which consists of continuous web surfing over Wi-Fi at 150 nits of brightness. However, the XPS 13 wasn’t too far behind with a time of 12:39.

This was a close one. But with a more accessible price point, extra long battery life and a beautiful, versatile design with plenty of ports, the HP Spectre x360 squeaked out the win. It’s a great laptop for just about anyone. But if you need more power, a better display with a more comfortable keyboard, the Dell XPS 13 is the way to go. No matter what you choose, you can’t go wrong with these svelte ultraportables.