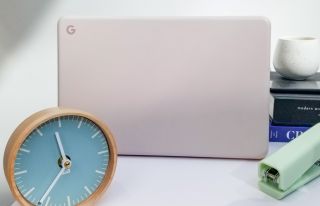 The Google Pixelbook Go is one of the best Chromebooks you can buy, and now Google is finally releasing the more colorful version out into the wild, aka the "Not Pink" pink model, which starts at $849.

The other models also come in "Not Pink," so if you want to go balls to the wall with your Chromebook, you can get the $1,399 Pixelbook Go, which is outfitted with a Core i7 Y-series processor, 16GB of RAM, a 256GB SSD and a 4K display.

In our Google Pixelbook Go review, we gave the laptop credit for its bright 13.3-inch, 1920 x 1080 display, which reaches 368 nits of brightness to be exact. Most importantly, it also has awesome long battery life, at 11 hours and 29 minutes. Keep in mind that the 4K Pixelbook Go will have shorter battery life.

Now that the "Not Pink" pink model is finally here, do you prefer it over the black? I know I do, but it might still be a little too flashy for some.