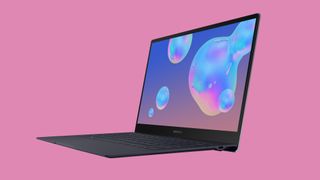 We were smitten by the Samsung Galaxy Book S during our hands-on time with it last year. Samsung has now announced a new Intel version, and it has a first-of-a-kind trick up its sleeve.

Instead of employing Qualcomm Snapdragon chips (like the previous model), the Galaxy Book S uses an Intel Core i5-L16G7, or what Samsung calls "Intel Core processors with Intel Hybrid Technology." This makes the Galaxy Book S the first-ever device with an Intel Lakefield mobile chip.

The Lakefield SoC in the Galaxy Book S is a 10-nanometer chip and the first using 3D stacking and hybrid computing architecture. That means the chip looks more like a layer cake than a pancake. It lets Intel "mix and match" different components without increasing the footprint of the chip (Intel claims it's fingernail sized).

Lakefield was developed for a new class of ultra-mobile, on-the-go laptops, tablets and devices with folding and dual-screen designs. Microsoft's Surface Neo is supposed to be powered by Lakefield chips, although the folding PC is reportedly delayed due to the coronavirus. Much like the chips powering your smartphone, Lakefield has always-on connectivity and an ultra-low range standby power mode.

What this means for the Galaxy Book S's performance and battery life remains to be seen. Samsung isn't making any concrete claims, only that the Galaxy Book S "delivers full Windows 10 application compatibility and intelligently balances multiple high-performing processes" along with a rather vague promise of "long-lasting battery."

Other important specs found in the Galaxy Book S include 8GB of RAM and either a 256GB or 512GB SSD.

As for the design of the Galaxy Book S, well, it's stunning. We went hands-on with the Qualcomm version last year and had only positive things to say about the sleek notebook. This Intel model seems to have a similar, if not the same, design as the previous version. It weighs just 2.1 pounds and is 0.5 inches thin.

The chassis, available in Earthy Gold and Mercury Gray color variants, is made of metal and has a fanless design, so it should remain silent as you browse the web or watch movies on the 13.3-inch, 1080p touchscreen display. When you're watching under bright sunlight, kick on Outdoor Mode to boost the screen brightness to 600 nits.

As an always-connected device, the Galaxy Book S supports mobile data via a 4G LTE connection (sorry, no 5G just yet). You'll also get Wi-Fi 6 compatibility so you can get the fastest home internet speeds once you've upgraded your router and data plan.

For such a slim laptop, the Galaxy Book S has a decent selection of ports. You'll find a USB-C port on both sides of the laptop, along with a headphone jack and a microSD card slot. There is also a fingerprint sensor on the Galaxy Book S for instant sign-in via Windows Hello, and Samsung somehow fit quad speakers into this wafer-thin device.

Samsung hasn't revealed pricing and availability for the US (we've reached out to our contact to find out) but the notebook will be released in the UK on June 12 for £999 (around $1,230). That's a lot to ask for a laptop with such a low-power processor inside, so we're hoping to see some impressive performance numbers.

If the Galaxy Book S with Intel chips can outpace the Qualcomm version, it might fill the void left by the 12-inch MacBook and be a good alternative to ultrathin laptops like the Dell XPS 13. We're already impressed by the Galaxy Book S's design and we expect Samsung to deliver on the display, so the success of this notebook will ultimately come down to price, performance and battery life.