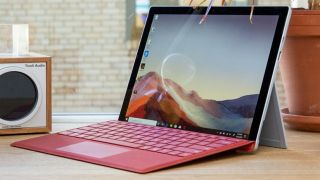 Cyber Monday is here and you know what that means. Microsoft's Cyber Monday deals are officially underway, which is excellent for those who are eyeing a new Windows laptop, especially if it's a Surface device. You'll find discounts on almost all  Surface devices, but also a ton of Windows 10 laptops available via the Microsoft store, so you're not tied to getting just a Surface.

The Surface Pro 7 and Surface Laptop 3 have seen some decent discounts so far, cheaper than they've ever been just for Cyber Monday. If you're looking for older Surface devices, then you're in luck, as there are plenty of Microsoft Cyber Monday deals on older hardware. Not sure which Surface you want? Read our Surface comparison guide, which should help you choose the right model.

You'll see other Windows 10 laptops from vendors like HP, Dell and Lenovo on the Microsoft store, so keep an eye out for some of the company's best laptops.

If you're not liking what you see on the Microsoft store, keep an eye on our Cyber Monday deals hub page to check out more hot products from other vendors.

Surface Go (Intel 4415Y/4GB): was $399 now $299
Microsoft' least expensive Surface device will soon be cheaper than ever. The base model Surface Go will sell for just $299 after a $100 discount. Microsoft also teased a $150 discount on the upgraded configuration. View Deal

Surface Pro 7 (Core i5) w/ keyboard & pen: was $1,429 now $999
Best Buy is taking $430 off the Surface Pro 7 with a Core i5 CPU and 256GB of storage. This epic deal includes the Surface Pen and Type Cover keyboard, accessories we strongly recommend. View Deal

Surface Pro 7 (Core i5) w/ Type Cover: was $1,029 now $799
This could be the best PC deals on Cyber Monday, period. Not only is the new Surface Pro 7 heavily discounted but the deal (starting Nov. 22) even includes the super-comfortable Type Cover keyboard, a $129 value.

Surface Pro 7 (Core i5/8GB/256GB) w/ Type Cover: was $1,329 now $999
If you need more storage than what the previous deal offers, Microsoft is taking $330 off the 256GB model of the Surface Pro 7. Again, this epic deal includes the Type Cover keyboard, an accessory we strongly recommend. View Deal

Surface Laptop 3: was $1,299 now $999
Yet another exceptional deal on a new product, Microsoft is selling both the 13.5-inch and 15-inch versions of the Surface Laptop 3 for $300 off this Cyber Monday. The discount applies to all configurations and begins on Nov. 22. View Deal

Surface Book 2 (select models): Up to $500 off
We don't know too many details about this deal but select Surface Book 2 models will be a whopping $500 off starting on Nov. 28. A detachable 2-in-1, the Surface Book 2 is Microsoft's most expensive and most powerful device. View Deal

There are a plethora of Windows 10 PCs on the Microsoft store, many of which will be discounted for Cyber Monday. If you don't want a Surface, these are the best Cyber Monday discounts from third-party laptop makers.

Acer Swift 7: was $1,699 now $1,399
In our Acer Swift 7 review, we gave the Swift 7 credit for its inconceivably thin and lightweight design, gorgeous 14-inch display and surprisingly long battery life. This model comes with a Core i7-8500Y CPU, 16GB of RAM and a 512GB SSD.View Deal