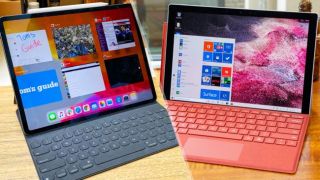 With the iPad Pro gaining cursor support, both Apple's and Microsoft's flagship tablets are positioning themselves as genuine laptop replacements.

Microsoft's Surface Pro tablets have long put up an argument against the best laptops, and the latest model, the Surface Pro 7, is no different. It runs full Windows 10 Home and can be attached to the optional Type Cover keyboard for cursor support.

While the Surface Pro 7 has coasted for years as the best tablet-made-laptop-replacement, times they are a-changin'. Who else could knock Microsoft off its perch than Apple?

In bringing trackpad support to the iPad Pro 2020, Apple is taking the long-overdue step of turning the iPad Pro into a viable primary computing device. So which is the best tablet, and can either of them serve as your next laptop? Read the round-by-round comparison below to help you decide which of these two tablets is best for you.

The iPad Pro looks almost identical to the previous model, which means it's still a super-slim, lightweight slate with a minimalist aesthetic and quality materials. The casing of the iPad Pro is made out of aluminum while the back panel is a sheet of glass.

On the back, is a large Apple logo and a new camera module that houses dual lenses and a LiDAR sensor. You'll find dual speaker grills on the top and bottom of the slate along with volume controls on the top-right side. The biggest improvements made to the iPad Pro in recent years are the thin(ner) bezels and a magnetic strip added to the right side that holds and charges an optional Apple Pencil.

The Surface Pro 7 is also a nice-looking tablet but it could use some updates. For one, the tablet still has thick bezels surrounding its display, which takes away from an otherwise stunning panel. And as much as I like that the Surface Pro 7 has a built-in kickstand, I hope Microsoft finds a more stable solution in future versions.

Apart from those qualms, the Surface Pro 7 is a slick slate. It has a magnesium-alloy material and a chrome Microsoft logo on the rear kickstand. Yes, the Surface Pro 7 is thicker, at 0.3 inches, and heavier, at 1.7 pounds, than the iPad Pro (0.2 inches,1 pound), but it wins some of those points back in the next section.

Ports? What ports? At least, not on the iPad Pro, which has a single USB Type-C (non-Thunderbolt 3) on the bottom edge for charging.

With the Surface Pro 7, you get a USB 3.1 Type-A port and magnetic Surface Connect port next to the USB Type-C input on the right side. On the left side is a headphone jack while a microSD card slot hides behind the Surface Pro 7's kickstand.

Watching your favorite TV shows or even just browsing the web, is an absolute delight on both of these tablets thanks to their stunning displays. If I had to choose one (and I do), I'd go with the iPad Pro's display, as it's larger, brighter and more vivid.

According to our colorimeter, the iPad Pro's display reaches a blinding 559 nits of brightness, making it more radiant than the Surface Pro 7's 395-nit panel.

Color reproduction also goes to the iPad Pro, which captures 123% of the sRGB color gamut compared with the Surface Pro 7's 102% coverage.

As it stands, the Surface Pro 7 has the best detachable keyboard on the market, whereas the Smart Keyboard for the iPad Pro is uncomfortable and overpriced.

I'll start with Microsoft's excellent Type Cover keyboard. For me, it's a must-have accessory for any Surface tablet. I wish it was included with your Surface Pro purchase, but $130 is a reasonable price considering you get a full-size keyboard with a touchpad.

The keys themselves are what makes the Type Cover such a great accessory -- they're very comfortable to type on. Also, Microsoft sells a Signature Type Cover ($159) in Poppy Red and Ice Blue with an Alcantara fabric material. My only problem with the keyboard is its flexible bottom, which makes the slate difficult to use on your lap.

Even when the Magic Keyboard arrives in May with touchpad support, the absurd $300 (starting) price puts it out of contention for a lot of people. We'll give it a fair shake once we get one to test, but it'll need to be nothing short of its name to justify the premium.

The optional stylii are more evenly matched. I prefer the feel of the Apple Pencil, although it costs a bit more than the Surface Pen ($99), at $129. They're both great to draw with but the Apple Pencil has the advance because you can magnetically attach it to the iPad to charge.

There is no doubt that the Surface Pro 7 can deliver laptop-level performance. After all, the Intel Core i5-1035G4 CPU and 8GB of RAM in our review unit are the same components you'd find in a premium notebook.

The new iPad Pro runs on an A12Z Bionic SoC, which is essentially the same chip as the A12X in the previous version but with one additional GPU core. The new iPad Pro scored a 4,720 on the Geekbench 5 overall performance test, which is slightly higher than the Core i5-equipped Surface Pro 7 (4,443). However, higher-end Surface Pro 7 models with Core i7 CPUs and 16GB of RAM top the iPad Pro.

We don't know how these two compare when it comes to graphics muscle. The iPad Pro should perform a bit better than the previous model, which was already a GPU beast. At the same time, the Surface Pro 7's new Ice Lake CPUs come with Iris Plus graphics, which is a big step up from the previous UHD graphics.

We'll need to do more testing before we can declare a definitive winner. For now, both tablets deliver performance in line with premium laptops.

The battery life of both of these tablets actually took a dip this year. The iPad Pro went from 13 hours and 14 minutes in the 2018 model to 10 hours and 16 minutes on our battery test (which involves continuous web surfing over Wi-Fi at 150 nits).

You'll notice two things that favor the Surface Pro 7 when you're shopping for these tablets. The first: the Pro 7 is often on sale for several hundreds of dollars off. And second, the accessories are cheaper than the Apple equivalents. And yet, the ridiculous component upgrade costs Microsoft charges actually makes the Surface Pro 7 a worse value if you buy the slate alone.

Unfortunately, iPad Pro accessories cost more than those for the Surface Pro 7. The Apple Pencil (Gen 2) will run you $129, the Smart Keyboard Folio is $199 and, when it arrives in May, the Magic Keyboard will cost an absurd $349.

That was a photo finish but the iPad Pro took the narrow victory in this face-off. Apple's tablet has a sleeker design, a brighter, more vivid display, and longer battery life than the Surface Pro 7. But that doesn't mean the iPad Pro is the right tablet for you.

The Surface Pro 7 remains a better laptop alternative to the iPad Pro because of its full Windows 10 operating system. Trackpad support is a great addition but without the ability to run macOS programs, the iPad Pro remains limited to apps in the App Store. Also, the Surface Pro 7 has a much better keyboard and a better selection of ports -- so it wins when it comes to productivity.