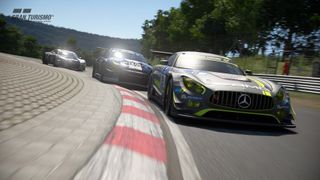 Sony and Polyphony Digital filed new trademarks for Gran Turismo ahead of the PS5 event, hinting at a new Gran Turismo potentially launching alongside the PS5 this holiday season.

The trademark listings were discovered by TweakTown on Argentina's National Institute of Industrial Property database.

Since these trademarks were filed on June 3, we now expect to see a Gran Turismo reveal at the PS5 event. The event was originally planned for June 4, but Sony postponed it amid nationwide protests following the death of George Floyd during an arrest on May 25.

The event has since been moved to June 11. It's unclear what we'll see at this PS5 event, but there's a pretty good chance that Gran Turismo will be there considering how the trademarks are lined up.

We're also not really sure that it'll actually be called Gran Turismo 7 -- that's just a guess. In 2018, leaked footage of a demo from CES showed up on YouTube that revealed GT Sport running in "8K or 120 frames per second."

It's entirely possible that the reveal will be for GT Sport. We'll likely find out more about the next Gran Turismo game this Thursday, so stay tuned for more updates.