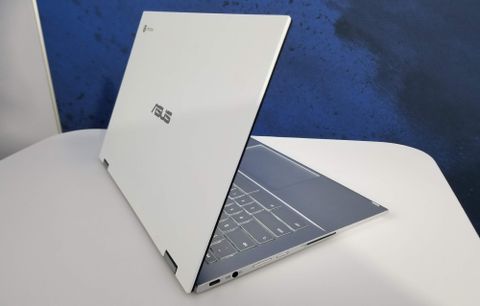 The Asus Chromebook Flip C436 offers security and performance in a premium chassis.

LAS VEGAS, NV –– Most people who know me, know that I’m not particularly fond of Chromebooks. Call me an old fuddy-duddy, but I’m a Windows-type of gal, and in my work life, it’s Mac all the way. But if the Asus Chromebook Flip C436 is any indication, I might have to seriously reconsider this position. The follow up to last year’s much-lauded Chromebook Flip C434, this latest edition seems posed to follow its predecessor and earn a place on our best Chromebooks page.

Asus hasn’t released the pricing on the Chromebook Flip C436 as of yet. The company did however, share the notebook’s specs. When it ships during Q1 or Q2, it will have up to a 10th Gen Intel Core i7-10510U processor, 16GB of RAM, a 512GB M.2 SSD and Intel UHD Graphics GPU.

I’m used to Chromebooks being made of cheap, ugly plastic, but the Chromebook Flip is a horse of a different color –– make that many different colors. Although the notebook’s aluminum lid is painted Aerogel White, depending on what angle you look at the laptop, you’re likely to see a different color. That’s because the paint has a slight iridescence that produces beautiful pastels depending on the angle. It gives a nice surprise pop of color that’s fun.

The center of the lid features a shiny Asus logo while the Chrome emblem is stamped in the top-right corner. The laptops rear features scores of perforations, not unlike a speaker grille. A pair of gleaming 360-degree hinges signals that the laptop can seamlessly transition from a traditional clamshell to a tablet and back.

The laptop’s interior has more of that lovely white hue, minus the iridescence with a full-size keyboard and a large touchpad.

The Chromebook Flip is light on ports with only a pair of USB 3.2 Gen 1 Type-C ports, a microSD slot and a headset jack.

In case you have any sensitive files that need extra protection, the Chromebook Flip has a fingerprint reader integrated into the power button.

Colors on the Asus Chromebook Flip C436’s display were bold and vibrant with sharp detail. I’m curious as to how the panel will hold up to our testing, particularly since Asus is claiming 100% sRGB color gamut. But during my demo, I was completely taken with the extra screen real estate provided by Asus’ four-sided NanoEdge display. At only 0.2 inches thick, there was a lot more of that 1920 x 1080 panel to love thanks to an 85% screen-to-body ratio.

The Chromebook Flip’s keyboard made a rather meh impression. The keys have a little bit of snap, but there was some mushiness. I think I’d be okay typing on them for awhile, but only time would tell.

Equipped with a 42 watt-hour battery, Asus is clocking the Chromebook Flip’s battery life at 12 hours. Chromebooks tend to have long battery lives anyway, but with the notebook’s Intel Project Athena certification, it stands a good chance of meeting that time.

In addition to improved performance and instant wake capabilities, Project Athena laptops are supposed to pack extra endurance on the battery front. We’ll just have to see how it holds up against our battery test.

The Asus Chromebook Flip C436 is pretty impressive for a Chromebook. It’s got an eye-catching design, pretty display and immense versatility by way of its 360-degree hinges. And it’s even got a fingerprint reader, all in one of the lightest, slimmest 14-inch Chromebook chassis. However, I wish the laptop’s keyboard had a bit more travel. But all things withstanding, the Chromebook Flip C436 is ready for its time in the spotlight.