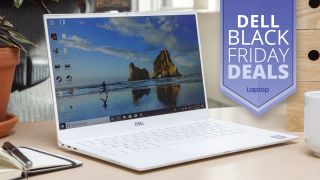 Update: Black Friday is over, so head over to our best Dell deals page for today's discounts.

Black Friday is here, bringing with it deals on some of the best laptops of 2019. Dell has been hard at work competing with other vendors to sell the most hardware, which means that prices on laptops are incredibly affordable. However, some sales are set to go live in a couple of days, so until then, we're rounding up the best Cyber Monday laptop deals you can get now and later on in the week.

As you shop, keep in mind that not every Dell Black Friday deal is a solid buy. For instance, the new XPS 15 was recently $999 ($100 off), but Dell was selling it for $912 back in September. On the other hand, using the code "SAVE12" brings most products in Dell's lineup down 12%, giving you an actual discount on the XPS 15.

Throughout the holiday season, we'll be hand-picking the best Dell Black Friday deals on everything from the Editor's Choice Dell XPS 13 ultraportable to the company's Alienware gaming rigs.

Meanwhile, the Editor's Choice XPS 13 (9380) is Dell's previous-gen laptop. It was released at the start of 2019 and sports Intel's Whiskey Lake chips along with a new webcam (that replaces the previous gen's "nosecam"). It's base config packs 8GB of RAM, but only 128GB SSD.

Dell G7 17 Gaming Laptop: was $1,499 now $1,099 @ Best Buy
Alienware's less expensive cousin, offers serious gaming power including a 9th Gen Intel Core i7 processor and an Nvidia RTX 2060 GPU. And it doesn't hurt that the laptop is stylish in its own right. View Deal

Dell Inspiron 3583 (Core i5): was $599 now $349 @ Best Buy
With its Intel Core i5 CPU and 256GB PCIe SSD, the Dell Inspiron 3583 laptop is a solid workhorse, able to do handle most productivity and multimedia tasks. It's even got a touchscreen. View Deal

If you want a premium gaming experience, you'll want an Alienware rig by your side. This summer we saw a wide range of Alienware deals, which means we can expect similar or cheaper Alienware deals this Black Friday.

Any Alienware laptop at or under this price would be considered an excellent deal over the Black Friday season. Look for coupons and discounts that take from $500 to $800 off full prices.