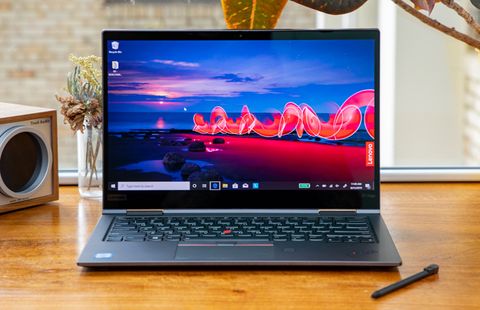 The Lenovo ThinkPad X1 Yoga OLED offers power, versatility, durability and an OLED display, all in a thin-and-light chassis.

I don't often have the opportunity to review business laptops. But when I do, I want them to be like the Lenovo ThinkPad X1 Yoga OLED. Priced at $2,399 ($1,199 starting), the laptop serves up a lot of the things I love in a notebook: power, bumping audio, an excellent keyboard and OLED, all on a captivating, aluminum platter. Plus, since it's Lenovo, you get a host of security features and plenty of durability to boot. However, the battery life leaves much to be desired and might give true road warriors reason for pause.

If it's OLED goodness you seek, you're going to pay a premium price for the privilege on this machine. Pay $2,399 for the more-premium configuration, and that bumps you up to a 1.9-GHz Intel Core i7-8665U CPU, 16GB of RAM, a 512GB PCIe SSD, an Intel UHD Graphics GPU and a 3840 x 2160 OLED touch panel. I had the pleasure of reviewing the top-tier model, which offers double the storage and goes for $2,549.

From now on, this is how I want every ThinkPad to look. I am simply loving the Iron Gray aluminum chassis for this line. It's a welcome change from the ink-black carbon-fiber and magnesium frame that's synonymous to this line of notebooks. This latest design is like wearing a red dress to a black-and-white party. Outside of the material change, this is still very much a ThinkPad, but for some reason, the laptop's few accents, such as the black-and-red X1 emblem in the bottom left corner, just seem to pop more. That's doubly so with the glowing red dot in the "i" in the ThinkPad logo in the top right corner.

You'll see another ThinkPad logo to the far right palm rest when you open the Yoga, albeit without the backlighting. A fingerprint reader sits directly to the right of the touchpad, which has the ThinkPad line's trio of discrete mouse buttons. The keyboard sits in a slight recess above the touchpad, with a bright red pointing nub located in the center.

As the name suggests, the X1 Yoga is a convertible. Its pair of 360-degree hinges allows it to gracefully transition from a traditional laptop to a tablet to presentation mode and back. I appreciated the sturdiness of the hinges as they kept the display securely in place in laptop mode; I had to jostle the system fairly hard to get the display to fold forward or back.

Rest assured that the ThinkPad X1 Yoga can take just about anything that you throw at it. The notebook has passed 12 Mil-Spec 810G tests, showing that it meets the U.S. military's standard for withstanding extreme temperatures, altitudes, humidity, shocks, vibrations and drops. Still, it would be a shame to damage such a handsome-looking system.

Lenovo's outfitted the X1 Yoga with a host of security features, some of which are more readily visible than others. There's the ThinkShutter, a physical sliding switch to block the webcam to guard against prying eyes. You also have the fingerprint reader, which uses a self-contained system-on-a-chip to analyze and record your fingerprint. Lenovo claims that this is more secure than previous iterations, which stored this information on the host machine. The laptop also features dTPM 2.0 technology, which works to protect any unencrypted passwords being used on the laptop. The chip also checks to ensure the BIOS hasn't been compromised by malware.

The X1 Yoga comes with a good amount of ports, some a little more niche than others. On the right sits a USB 3.1 Type-A port, a secure lock slot, the power button and a slot for the included stylus.

Along the left, you'll find another Type-A port and two Thunderbolt 3 ports, one of which is connected to a port that can act as an Ethernet adapter or a point of contact for a docking station. The left side also holds a full HDMI 1.4 port and a headset jack.

If your job issues you a laptop with an OLED display, consider it an executive perk. Watching the Tenet trailer on the X1 Yoga's 14-inch, 4K OLED panel was a joy. Not only could I see individual strands of actor John David Washington's jet-black beard hair, but I could also see the stubble signaling that it might be time for a touch-up. And while his warm brown skin looked great in the trailer, I was more captivated with how red and blue lights danced across his face, turning it into a handsome, yet otherworldly vista.

Measuring for brightness, the Yoga's screen averaged 423 nits, easily outshining the 367-nit average and the Latitude's 280. But the Spectre (483 nits) and XPS 15 (626 nits) were significantly brighter.

The Yoga's 10-finger capacitive touch screen is extremely responsive, keeping up with my spastic doodles in Paint.

The Yoga's bottom-mounted speakers sound better than they have any right to, especially when slapped to the bottom of a business laptop. I was really impressed with the depth the speakers, paired with Dolby's Atmos Speaker software, conveyed on H.E.R.'s "Something Keeps Pulling Me Back." The Dynamic setting on the software gave the illusion of surround sound, which really assisted in boosting the etherealness of the instrumentals, such as the drum machine and the synthed-out keyboard. The artist's strong alto cascaded through my smallish living room.

The next best setting is Music, as it gives you fullness with a slight volume boost on the highs and mids.

Why can't all island-style keyboards be like this? With the company's trademarked smile-shaped keys, the Yoga's keyboard is an absolute joy to type on. The keys are well-spaced and springy, with great travel. I easily reached 77 words per minute on the 10FastFinger typing test, surpassing my regular 70 wpm. If I have one gripe about the keyboard, it's that Lenovo placed the Fn right next to the left Ctrl key, which messed with my Windows shortcuts.

At 3.9 x 2.2 inches, the Yoga's touchpad is a bit smaller than those on competitors, but it still gets the job done, smoothly performing Windows 10 gestures like pinch zoom and summoning Action Center. Since this is a business laptop, there are three discrete mouse buttons instead of two. It's fine, I guess. I've never felt the need to use the center button. Same thing goes for the bright red pointing stick in the center of the keyboard. It definitely works. The tiny, raised dots rested gently against my fingertip, ensuring a firm grip as I awkwardly navigated webpages. It's really an acquired taste.

Now, you could interact with the Yoga's touch screen with your fingers, but why get smudge marks on that lovely OLED display? Instead, just use the ThinkPad Pen Pro cleverly stashed in the right side of the laptop. I wish there were a pop-out function to get the pen out, as not everyone has long enough nails to dislodge the stylus from its home.

But once you get the Pen Pro in hand, it works beautifully, gliding across the screen like the skinniest ice skater. At 2,048 levels of pressure sensitivity, it's not as accurate as some other styli, but I didn't have any problems drawing a few flowers in a meadow on a sunny day. The pen strokes were smooth, and I didn't experience any lag.

Armed with a 1.9-GHz Intel Core i7-8665U processor and 16GB of RAM, the X1 Yoga is not to be taken lightly on the work front. The notebook handled 20 open Google Chrome tabs while streaming an episode of Fleabag on Amazon Prime Video.

When we ran the HandBrake test, the Yoga took 18 minutes and 49 seconds to transcode a 4K video to 1080p. That's faster than the Latitude and the Spectre, which clocked 19:09 and 21:13, respectively. Still, the Yoga's mark is nowhere near the XPS 15's blistering 8 minutes.

The Yoga (1TB PCIe SSD) finally overtook the XPS 15 (1TB PCIe SSD) on our file-transfer test, with the former duplicating 4.97GB of mixed-media files in 7 seconds, for a rate of 782.9 megabytes per second. The former achieved 508 MBps. The Specter x360's 1TB SSD had a transfer rate of 424 MBps, while the Latitude (512GB M.2 PCIe NVMe SSD) blew the competition away, with 848MBps.

An integrated Intel UHD Graphics 620 GPU is the last graphics card you want to game on, as evidenced by the Yoga's 13 frames-per-second score on the Dirt 3 benchmark. The 1080p version of the notebook notched 31 fps, which is just above our 30-fps threshold. Stil, neither score came close to the 58-fps premium laptop average. The Latitude (UHD Graphic 620 GPU) did a little better, at 46 fps. With their discrete GPUs, the XPS 15 (Nvidia GeForce 1650 GPU) and Spectre (GeForce MX150 GPU) scored 80 and 118 fps, respectively.

Alas, as pretty as 4K OLED is, the associated battery life leaves much to be desired. The Yoga lasted only 4 hours and 57 minutes on our battery test (continuous web surfing over Wi-Fi at 150 nits). That's well below the 8:38 premium average. The Spectre and XPS 14 lasted much longer, at 7:46 and 8:07. The Latitude, with its non-OLED screen, lasted 13:08.

We ran our heat test (15 minutes of streaming a full-screen 1080p video) on the Yoga and measured strategic points on the laptop. The touchpad measured 81 degrees Fahrenheit, while the middle of the keyboard hit 94 degrees. The hottest part of the laptop is the bottom, which registered 98 degrees. That's slightly above our 95-degree threshold, but I still comfortably used the notebook in my lap while typing the majority of this review.

If only the Yoga's webcam could produce images worthy of being shown on that beautiful display. Unfortunately, the 720p shooter blew out the white wall and made my bright neon-green sweater look dull. And the camera failed to capture any of the purple in my hair. Additionally, while the Yoga showed some of the knit pattern in my sweater, my couch looked like a weirdly colored blob, as the camera missed the detail in the black-and-white fabric pattern. I highly recommend investing in an external webcam for any video conferencing needs.

Lenovo packaged the Yoga with several helpful, branded utilities, such as the Lenovo Display Optimizer, which allows you to change the color temperature using several presets. There's also Vantage, which displays system health and warranty. This tool also allows you to set power, display sleep profiles and check how safe nearby Wi-Fi networks are.

The laptop also has Glance, an eye-tracking software used for system logins. Or when the laptop is connected to an external monitor, you can snap windows with a glance; if you're working on one screen, the other will blur to protect your sensitive information.

And if Lenovo's Display Optimizer isn't enough for you, don't worry; the laptop also has Dolby Vision, which has its own presets to choose from.

There is, of course, some bloatware thanks to Windows 10 Pro, including Candy Crush Friends and Farm Heroes Saga.

If not for its battery life, the $2,399 Lenovo ThinkPad X1 Yoga OLED would be breathing that rarified air of a 4.5-star, Editor's Choice inductee. Simply put, the Yoga is stacked. You get serious power from its Core i7 processor and integrated graphics. And there's the ThinkPad's world-renowned keyboard, effortless versatility, surprising durability and trustworthy security measures. There's also that breathtaking OLED display to consider.

Yeah, there's a lot of win in them there hills, but that battery life is a mood killer, especially since both the Dell XPS 15 and HP Spectre x360 have longer battery lives with OLED panels and discrete graphics. Pound for pound, the Lenovo ThinkPad X1 Yoga OLED is an excellent business laptop, with a major albatross on its neck.