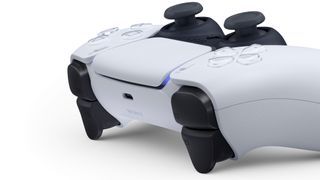 Sony revealed the PS5 DualSense controller earlier this year, but we still have no idea what the controller looks like in someone's hand or even compared to other controllers.

However, a leaked image of the DualSense controller was discovered on Resetera, and it looks much bigger than we initially expected. Here's what the PS5 controller looks like in the flesh.

I palmed my DualShock 4 controller to compare it to the above image, and just from a glance, the DualSense controller does seem chunkier, taking on a form similar to the Xbox controller.

However, keep in mind that we don't know the size of this person's hands, so if they have small hands, the controller will naturally look a lot bigger. Despite its potential size, the controller looks nice in person.

If the controller really is a bit bigger than the DualShock 4, that'll be a welcome improvement, as the previous controller is a tad small and known to cause the occasional hand cramp.

It's also possible that this image is fake and it's all expertly done in Photoshop, but that would be impressive, considering the way the lighting bounces off the analog sticks and grips of the controller.