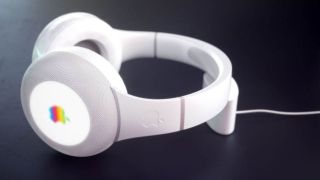 In other words, you may no longer need to scramble for a volume rocker as adjusting the volume of your audio may be as simple as using a hand swipe.

Using the upcoming AirPods Studio would make you look like a cool sleight-of-hand magician. Here is an example of how swipe-based controls would work, according to the patent: "[One] gesture input is a downward swipe in a direction from atop the user's scalp towards the user's neck wherein the adjusting the playback of the audio signal comprises decreasing a volume of the audio signal output from the first and second speakers."

Conversely, you can increase the volume of your music by gesturing upwards from your neck to your scalp. Pretty sweet, right?

The patent also revealed that one can issue commands to Apple's over-ear headphones by using a touch interface integrated into the earpiece.

Although swipe-based hand gestures sound pretty cool, the patent acknowledges one major impediment — can Apple’s over-ear headphones respond to users’ hand-gesture controls regardless of its orientation? Audiophiles can wear their headphones in a number of different ways, including “upright with the headband around the top of the head and downward with the headband around the back of the neck," the patent wrote.

According to the patent, the answer is yes — thanks to capacitive and optical sensing technology. Capacitive sensors can detect skin contact while optical sensors can measure distances between the sensor and different parts of the ear. This will help AirPods Studio determine its orientation on the user’s head and, as a result, gesture detection will not be thwarted.

It’s worth noting, though, that patents do not always paint an accurate picture of what technologies the final production model will have. But it does give us some insight on the behind-the-scenes visions Apple may have for its highly anticipated headphones.

If you’re as excited as we are about the forthcoming AirPods Studio, and you’re curious about when you’ll finally be able to get your hands on the device, 9to5Mac states that the over-ear headphones are reportedly poised to hit store shelves by the end of this year, but due to pandemic-related setbacks, this may be delayed.

To stay abreast of all the latest Apple over-ear headphones news, check out our oft-updated AirPods Studio rumor hub.