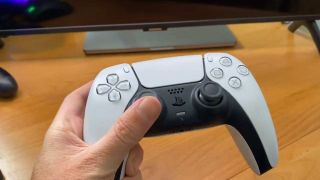 The hype for the PlayStation 5 is at a fever pitch. From rumors about preorders, to artist renderings of potential alternative color schemes, gamers are desperate for any news about the upcoming console. Geoff Keighley just fed the hungry masses with his recent livestream of an exclusive hands-on with the new DualSense controller as a part of his Summer Games Fest. While we didn’t necessarily learn anything new, Geoff provided some examples of how these features would work through a demo of Astro’s Playroom.

The three most exciting features of the DualSense are its adaptive triggers, haptic feedback, speakers and integrated mic. We’re especially looking forward to how each might coincide with gameplay.

One of the most exciting features about the upcoming DualSense controller are its adaptive triggers, which will allow for far more interactivity than previous controllers. During the stream, Geoff refers to the possibility to “create tension points or haptics” inside of these triggers. He continues, “so imagine pulling this down and feeling the pressure from a bow and arrow” or “feeling active reload points” in an action game.

With this technology, developers can program the triggers to create tension points based on what’s happening within the game’s world. This could greatly increase the immersion of certain mechanics. For instance in a game like the upcoming Gran Turismo 7, depressing the right trigger to break could simulate the actual pressure of deploying the break. Or on a current title like Ghost of Tsushima, pulling back and holding the bowstring could feel much more realistic.

As Geoff demonstrated in the Astro’s Playroom demo, there were different vibrations which correspond with navigating a sandstorm or getting struck by lightning. In racing games like Dirt 5 or Gran Turismo 7, the feature could be used to effectively simulate the force of a spinout or the taking an especially tight curve.

With something like Demon’s Souls, I highly anticipate feeling the weight of each attack striking my armor and feeling as encumbered as my character as I trudge through the murky waters of the Valley of Defilement. And as for Ratchet & Clank: Rift Apart, the ways in which each gun could be programmed to provide different sensations of feedback and recoil is exciting.

The DualSense’s haptic feedback seems well-paired with how Sony is treating their integrated speakers. Instead of just feeling the vibrations of the controller, audio will frequently emanate from it depending on what’s happening in this game. While this was a feature prominent with the DualShock 4, the DualSense intends to improve upon it with the harmony of sounds, feedback, and vibration.

This could greatly benefit a title like Horizon: Forbidden West, as being able to hear the sounds of grass crumbling under a machine's weighty stomp will make for a far more immersive stealthing experience. And for a horror game like Resident Evil Village, vividly hearing every sound your pursuer makes while deciding which hiding spot is safest could be the difference between life and death.

4. Blowing into the controller

At some point during the stream, Geoff demonstrates one of the weirder mechanics of the Dual Sense controller. He blew into the controller to cause a fan to spin and progress through an area in Astro’s Playroom. How exactly this works is hard to determine, but my best theory is that the DualSense controller picks up the harsh noise through its mic and recognizes that the user is blowing into it.

How PlayStation 5 developers could make use of this requires some deeper imagination, as it’s a bit unorthodox. However, I could see it being applied to something like Sackboy: A Big Adventure as a way to activate fans within the level to ride the current and reach higher points of interest. This could definitely be an amusing gimmick, but whether or not it’ll see any actual use is currently unknown.