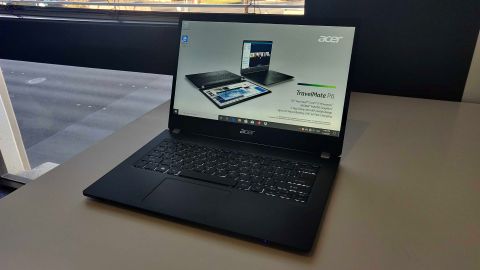 LAS VEGAS -- Acer's TravelMate P6 business laptop was one of the best surprises of 2019. In my review, I noted similarities to Lenovo's excellent ThinkPad X1 Carbon, which include a durable but lightweight chassis, generous selection of ports and fast performance.

Acer just launched a new TravelMate P6 at CES 2020, and Lenovo should be very worried. Along with the P6, Acer also unveiled the TravelMate P2, a more budget-friendly business laptop.

I went hands-on with both devices at CES 2020. Here is everything you need to know about the TravelMate P6 along with some first-look impressions.

It's all about weight with the TravelMate P6. Acer has made the shift from aluminum to magnesium-alloy on most of its laptops, including these business machines. Magnesium alloy is incredibly lightweight but has many of the same properties as aluminum. Sure enough, the TravelMate P6 felt almost weightless when I carried it around a hotel room at CES 2020.

The verdict is still out on whether magnesium alloy is stronger than aluminum, but it's good enough to give the TravelMate P6 military-grade durability.

That's an incredible feat when you consider that the TravelMate P6 has a 14-inch display but weighs only 2.5 pounds and is 0.65 inches thick.

The TravelMate P6 looks similar to its predecessor. It has the same retro styling but with black surfaces instead of gray. The screen folds back flat so you can collaborate with others, which is especially useful when you combine it with the optional touchscreen.

The TravelMate P6 is meant for business users, so it needs to have strong security to protect sensitive data from getting into the wrong hands.

As such, the Travelmate P6 runs Windows 10 Pro and has several hardware features to keep the laptop secure. Those include a fingerprint reader on the power button and an IR camera, both of which ensure secure login via Windows Hello. When you're not using the webcam, a shutter slides over it to protect you from snooping eyes.

Inside the Travelmate P6 is a TPM 2.0 chip that ensures all passwords are encrypted. And on the software front, Acer includes ProShield, a suite of security and management tools.

I loved the variety of ports offered on the previous TravelMate P6, and that doesn't change with the new model.

Your peripherals can connect to the P6 via its Thunderbolt 3 port or two USB 3.1 Type-A inputs. If you don't have a USB-C cord, the Travelmate P6 has an HDMI 2.0 port for connecting to monitors. There is also a microSD card slot, an Ethernet port, a SmartCard reader slot, a Nano-SIM slot, and a headphone/mic jack. Well done, Acer.

The TravelMate P6 has a 14-inch, 1080p display that gets up to 300 nits in brightness. Acer claims the panel covers 100% of the sRGB color gamut, which would be a solid result if accurate.

The display looked nice from what I could tell in a dimly-lit CES 2020 hotel room. Colors were vivid, if unexceptional and the screen was plenty bright. We'll get a better idea of how good the panel really is when we get it in our lab.

There are both non-touch and touchscreen variants of the display, all of which promise viewing angles of 170-degrees.

The TravelMate P6 has a backlit keyboard that Acer calls "FineTip." The keyboard felt very similar to the one on its predecessors, which is to say that it is very comfortable to type on. The keys have deep travel and a nice click to them.

You can configure the TravelMate P6 with some pretty beefy specs. That includes up to a 10th Gen Intel Core i7 CPU, up to 24GB of RAM and even an optional Nvidia GeForce MX250 graphics card. Storage goes up to a 1TB PCIe SSD, so you shouldn't worry about running of space.

These specs put the TravelMate P6 in line with other premium ultraportable laptops, although the discrete graphics card is a unique addition we're happy to see.

There are two different battery options for the TravelMate P6: a 60Wh and a 45Wh. Acer rates the battery life of the base model with an integrated GPU at 23 hours with the larger battery and 18 hours with the smaller one. These are based on Acer's own testing, so take them with a grain of salt.

Upgrading to the touch screen models with discrete graphics cuts the battery life down 12 hours with the large battery and 9 hours with the 45Wh option. Those aren't bad runtimes, but they're a bit step down compared to the non-touch model.

Note, the TravelMate weighs 2.4 pounds with the smaller three-cell battery.

If the TravelMate P6 is too pricey, consider the new TravelMate P2. This 15.6-inch laptop has lower-end specs than the P6 (and a lower starting price) but many of the same features, like military-grade toughness and 10th Gen processors.

The TravelMate P2 also has a similar design to its more premium relative, but it's not as portable, at 0.8 inches thick and 4 pounds. It also doesn't feel nearly as premium, so we recommend saving up a bit for the P6.

We've been waiting for a true contender to the Lenovo ThinkPad X1 Carbon, and the TravelMate P6 might just be it. With a lightweight yet durable design, 10th Gen processors, a discrete graphics card and enticing battery life ratings, the TravelMate P6 has our attention. Now we just need to get our hands on a review unit to see how it holds up against the best business laptops.