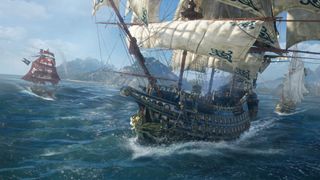 Remember that cool pirate game, Skull & Bones, that Ubisoft has been talking about for like three years now?

As you might have noticed, Skull & Bones wasn't anywhere near the recent Ubisoft Forward event, but according to Video Games Chronicle's sources, it seems like it's moving away from a static world (like in Assassin's Creed IV: Black Flag) and will take part in "live storytelling."

The fate of Skull & Bones

At first, Ubisoft was planning to go all-out with Skull & Bones, from its customizable ships exploring the vast open sea to intense PvP battles in stormy waters. The company even started developing a "female-driven" TV show with production company Atlus Entertainment.

However, it seems Skull & Bones couldn't put itself in the same spotlight as other open-world games, like Assassin's Creed or The Division, which caused Ubisoft Singapore to rework the concept of the game.

The game has been moved to a "live" game model, so it will now feature a world with quests, characters and storylines that will change over time based on the actions of the community. This concept seems interesting in theory, but it could make the story and characters shallow because they aren't permanent.

It'll be interesting to see what shape Skull & Bones takes, because it's been in limbo for a while, and it's unclear what this "live" game model will look like.