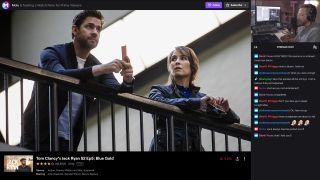 Twitch announced today that its new Watch Parties feature, which lets streamers watch Amazon Prime Video content along with viewers, will begin rolling out in beta this month (via Neowin).

The feature was first tested on a limited basis starting back in October of last year, but this marks its first wide release, even though it's going to retain that "beta" tag for now.

The feature couldn't come at a better time with stay-at-home orders around the country preventing shared watch experiences from happening in person. The feature is hitting Twitch Partners in the US first and will roll out to all Twitch creators in the coming weeks with an eye on a global rollout in the future.

At present, the available library is a bit limited with about 75 movies and TV shows (and far more TV shows than movies). The list includes Amazon Originals like Tom Clancy's Jack Ryan, The Marvelous Mrs. Maisel and The Boys along with a collection of hit shows from the last 10 to 20 years, including Parks and Recreation, Sex and the City and Survivor. Amazon promises to "soon have the majority of Prime Video content included."

Currently, users can only join Watch Parties via the desktop web app on Firefox or Chrome and, of course, you must have an Amazon Prime membership to join a Watch Party.