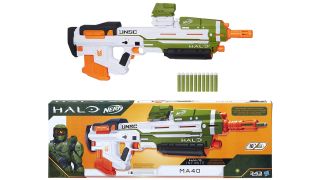 A new Nerf gun has recently appeared on Amazon, and while we're not in the Nerf-news-writing business, this Nerf gun, the Halo MA40 Motorized Dart Blaster, is based on Halo Infinite.

However, that alone didn't catch our attention, it's the little detail at the bottom of the description that states: "GAME CARD WITH UNLOCK CODE: It includes a game card with a code to unlock a digital asset in the Halo game."

I've never bought myself a Nerf gun before, but I just might for this mysterious "digital asset," which could be an in-game skin for the Assault Rifle that makes it look like a Nerf gun.

However, this is not exactly what I had in mind when 343 Industries said that there would be some kind of DLC for Halo Infinite. Jokes aside, this does give us a closer look at what kind of game Halo Infinite is.

If there's one digital skin for a weapon, there may be more digital skins for many different weapons and armor. And we already know Halo Infinite will have micro-transactions, so we can expect to spend some money on cosmetics.